Movies just like card games have always captured our imagination and hearts. We belong to a nation that lives and breathes movies, idolizes their stars and elevates them to demigod status. Similar to movies, sports also remains a great fascination for Indians. We have seen sports icons revered like gods in ou country. The hero-worshipping cult phenomena originated in India. So, movies with sports as the main plot should always be a sure winner, right? Unfortunately, for a nation that is fascinated with sports and movies, we haven’t seen much of sports dramas. Barring a few phenomenal films like Jo Jeeta Wohi Sikandar, Iqbal, Bhaag Milkha Bhaag, and Chak De, we don’t have any other notable mentions. Isn’t it baffling that in a country that is obsessed with sports and films, we haven’t seen the two clubbed together?

Indians love for card games needs no introduction. Movies made with card games as a theme can be as gripping as the game. It is bemusing to note that not a single Indian movie has been made about it, so far. Bollywood is losing big time by not tapping our card game love. Hollywood has cashed on this phenomenon big time; they have made some exceptional movies with card games as the central plot. Those movies were highly successful because of their entertaining screenplay and a gripping narrative. Let us delve into some of these movies in detail: 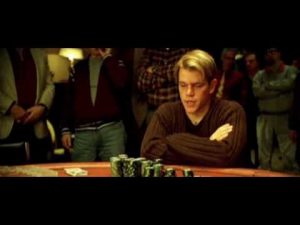 This is undeniably the greatest movie made on card games in cinema history. Rounders is what you call a quintessential card game movie. Matt Damon plays a guy named Mike, a law student, and a former poker player shoulders the responsibility to raise funds to help a friend struggling to pay off his bad debts. He now has to play at an underground poker circuit that he vowed never to return after losing his life savings. Rounders tapped the underground poker culture prevailing at that time very well and beautifully transformed it into the screen. The poker scenes in the film were truly the best of its kind. The settings, milieu associated with poker were portrayed so realistically. The film touched various issues like the mindset of players, psychological nuances involved in the game and most importantly the lingo normally used by professional players. Though it was not successful at the time of its release, it is now considered a cult classic movie in the poker circles. The film was largely instrumental in propelling poker to the mainstream popularity that it enjoys today. 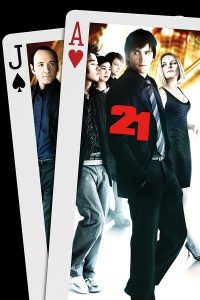 The film is based on the best-selling book by Ben Mezrich – Bringing Down the House. This fantastic movie showcases a group of MIT students who “count cards” to win millions at casinos around Las Vegas. However, things go awry once the casinos realize they are being scammed. This movie was inspired by the true story of the MIT Blackjack Team. Blackjack is undoubtedly one of the most popular games played in the casinos worldwide and the movie. Panned by the critics at the time of its release, it has now become a cult-classic.

This movie featuring Mel Gibson and Jodie Foster is a gripping movie based on Poker filled with ample doses of witty humor. Mel Gibson plays a gambler who wants to participate in the Wild West’s biggest poker game but falls short of $3000 to the required buy-in. The film is all about Gibson’s effort to raise the funds and troubles he encounters in his efforts. Though not as great as Rounders in its depiction of poker, it is still recommended for beginners. 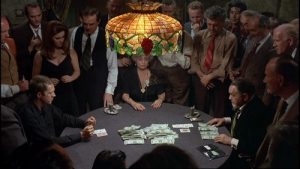 This is one of the best poker movie ever made. The film tells the story of a cocky, brash gambler played with élan by Steve McQueen out to topple the poker veteran Edward G Robinson, referred as “the man” in the poker world. Set in New Orleans in the 1930s in the wake of Great depression, the film captures the intricacies of the game very well and is known for its accurate portrayal of the high-stakes gambling culture. 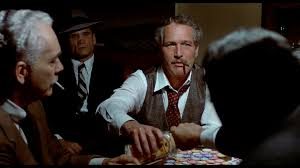 This film was a critical and commercial success and was awarded 7 Oscars. A con artist teams with up his old friend and seeks revenge on a mobster who was responsible for the death of his accomplice. The film is remembered for some accurate depictions of swindling, gambling and scheming techniques widely prevalent at that time. Poker played a key part in the plot. The one poker scene in this film looked far more realistic that those of any of the films mentioned thus far.

Other honourable mentions in this list are Casino Royale, The Cooler, California Split, The Gambler etc. Feeling excited after reading this article? Want to play a game? Why don’t you head over to Deccan Rummy to play an exciting game of online rummy or to Khelo365.com to play an action-packed game of poker? We offer you a live environment to relive the exciting experience you have just seen in movies. Do you want to experience the thrill of playing with some of the best players in India and get rewarded in the process? Would you say no to such a proposition? Comeon choose to play rummy at Deccan Rummy and get rewarded for doing so richly. You can also refer your friends to play with us and earn richly with our bring a friend offer.