Rummy Online is an easy and interesting card game. But it is foremost important to follow some etiquette while playing rummy failing which could cause you to lose heavily. Attention to the game is paramount. Though rummy games are very easy to play, players need to have a code of conduct while playing rummy online. Players who don’t take the game seriously will be bothered by external influences. To be a successful rummy online player, it is important to keep distractions to a minimum. Keep look out for these common distractions and avoid them completely. 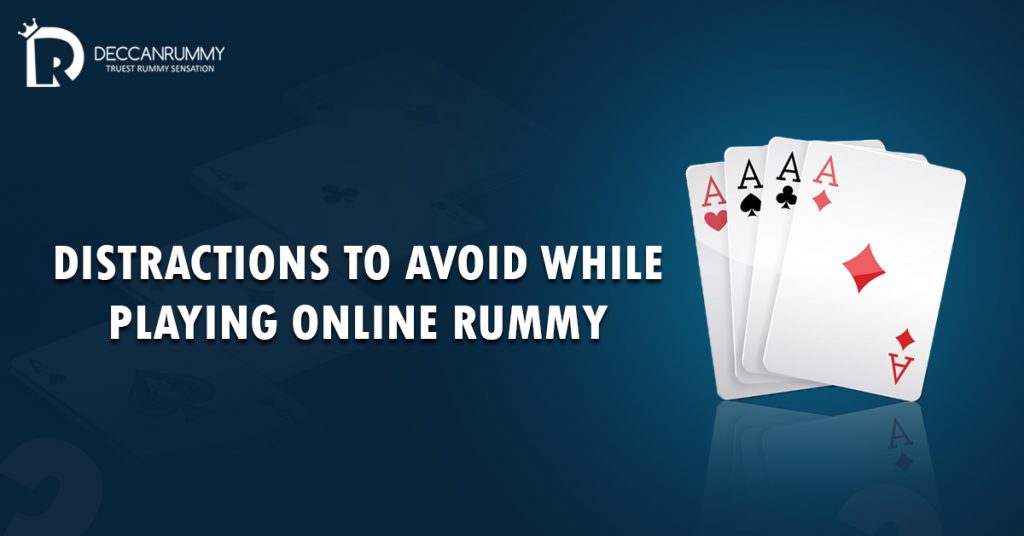 It is important to switch off any devices that are churning out noise more than what you can take. Noise is one of the primary distracters that are befalling the players. Unfortunately, many players play rummy in a noisy atmosphere which results in their downfall. Players must switch off TV, audio players and any other sound producing devices within the vicinity of their playing room. A calm and serene surrounding can do wonders while playing online rummy.

Some players have a bad habit of crunching snacks while playing rummy. According to the code of conduct for playing rummy, it’s a big NO. Eating while playing makes you lose focus from the game and eventually cause you to lose. Also, players tend to consume too much junk food while playing their favorite card game which might be harmful to their health too.

Many people commit the fallacy of associating rummy with Rum. There is absolutely no connection between rum and Rummy except the first 3 letters. Unfortunately, all movie depiction of card games seems to carry drinking and smoking which is not the way it should be. Players may think to have a peg or two while playing is harmless. Alcohol makes you tipsy and you may lose concentration in the game and may cause a big dent to your pockets. Similarly, avoid smoking while playing rummy online for similar reasons.

Chitchats are inconsequential conversations that end nowhere. If you keep chatting with someone while playing rummy, chances are very high that you lose the game badly. The rummy game demands proper attention and utmost concentration. There is no place for gossiping or trash-talking while playing rummy unless you’re ok with a big loss.

Many rummy players fall prey to this distraction. After a few defeats, in the beginning, they try to chase their losses. Sometimes it can turn the tide and you might be on a winning streak but often it is not recommended. You don’t want to burn your stay here by creating a dent on your bankroll.

Do not play the game when you’re really unwell. Some players hold it on and refuse to leave because they are so into the game. Such players are bound to lose the game heavily. It is better to take care of your health first and then return playing the game.

While avoiding all the distractions while playing rummy online completely may not be entirely possible. We advise to pull out the moment you drift away from the game. Always play rummy games in a quiet environment, where you can avoid all these distractions.If you are an Android user looking for a genuine 13 card rummy game download try our Deccan Rummy mobile for a scintillating mobile rummy experience.