There are so many expressions and words that we use in our daily conversations which have its origins in card games. For Instance, we often use words like “What’s the big deal”, “This is a great deal”, “Hot Deal” “Bluff”– most of these expressions have their roots in playing cards. We’ve seen many mentors teach their prodigies “Learn to play with the cards you’ve been dealt” which is encouraging a person to keep continuing despite being offered limited opportunities. Similarly, words like “He’s such a card” showcase the person in a positive light. Be it any emotions or feelings – sarcasm, anger, funny, seriousness or anything; you can always find some expressions that have their roots with card games. Many people even play card games for living. 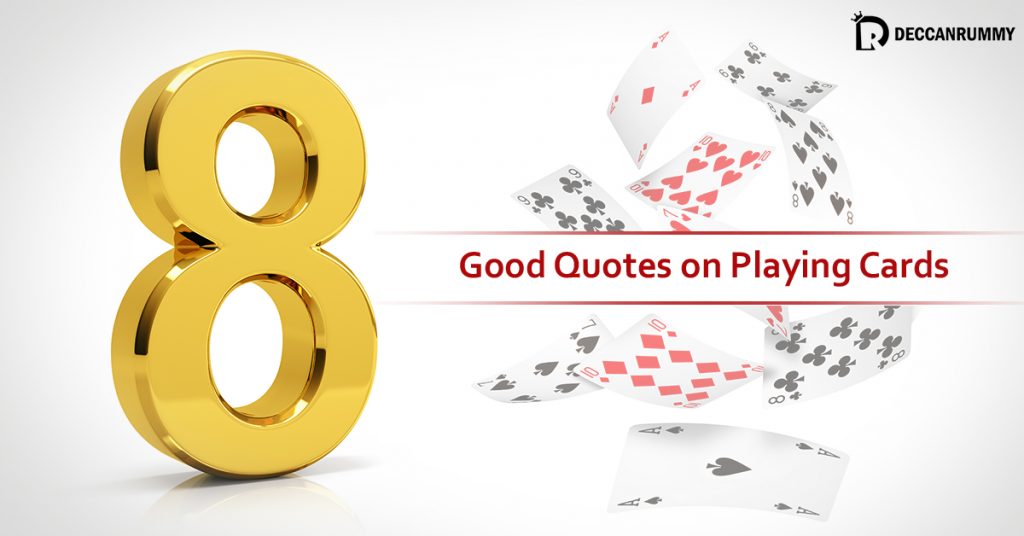 Some other expressions like “Odds are stacked against him”, “Play your cards right”, “ace in the hole” also have their origins with card games. Haven’t we seen people use the phrase “the Jack of all trades” or “an ace up your sleeve” to praise people? We are very sure that there are tons of other playing cards catchphrases that pop up during casual conversation.

1. One should always play fairly when one has the winning cards – Oscar Wilde
2. Life is like a game of cards. The hand you are dealt is determinism; The way you play it is free will – Jawaharlal Nehru
3. Life Consists not in holding good cards but in playing those you hold well – Josh Billings
4. Life is not a matter of holding good cards, but of playing poor hand well – Jack London
5. Each player must accept the cards life deals him or her; but once they are in hand, he or she alone must decide how to play the cards in order to win the game – French Philosopher Voltaire
6. Just when you think you’re playing your cards right. God shuffles the deck – Mark Sheppard
7. Marriage is a lot like playing cards. In the beginning, all you need is two hearts and a diamond. By the end, You’ll wish you had a club and a spade Unknown
8. I like to play cards. I’m not very good because I don’t want to calculate, I just play by instinct. But I’ve learned a lot of business philosophy by playing poker – Jack Ma
If you like this article, do not forget to share it on your social media profiles (FB, Twitter, and G+). Alternatively, you can also leave a comment below in the comment section of this article.