Great opportunities are hard to come these days, smart ones lap up even the tiniest of greatness available in their sight. Nothing comes close to the excitement for a rummy player than a rousing prize pool for winning it. Tournaments have an ardent following among the card game enthusiasts – they are the ultimate test of skill and endurance.

After the smashing success of the festival freerolls, Poker has already created quite the buzz in within the Indian rummy community and has always been the most preferred choice for Indian rummy enthusiasts. 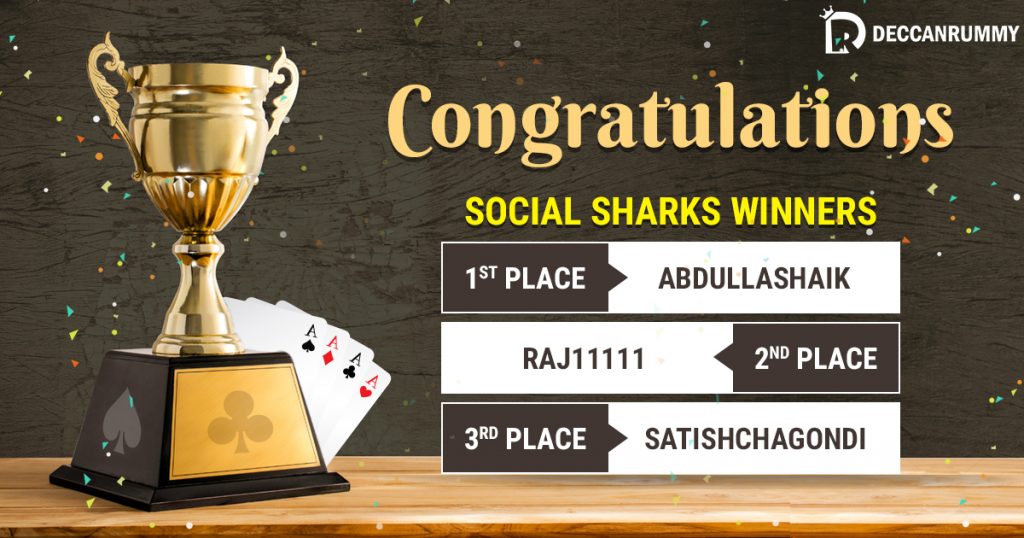 The much anticipated Social Sharks tournament was held on Apr 30 @ 3:.30 PM. Much like all our tournaments, the seats were close to a full house. The tournament will always remain special to our hearts. Ticket tournaments are always fun as they involve the users to perform an activity to get it. Just like the saying “The fruit of your own hard work is the sweetest” – we held some contests for the users so that they could answer them and get the free tickets. All our users actively participated in the contests.

The quizzes were an eclectic mix of rummy, cricket & movies – the 3 most preferred modes of entertainment in India. So the response we received came as no surprise. All the users who completed the objective received the free tickets within 24 hours. Since there was a buy-in option as well, some of the users who came at the last minute were able to buy the tickets and participate in the tourney.

The action was top notch right from the first deal, with players trying to outclass one another with some solid strategies. After some solid gameplay that lasted for nearly an hour, abdullashaik held his nerve to come out on top. We at Deccan Rummy would like to extend our heartiest congratulations to abdullashaik for his stupendous efforts to win this tournament. Special thanks to players who participated and made this tourney a massive success. Those who couldn’t make the prize cut this time, don’t lose heart! Keep trying, your moment is not too far off.

Whether you want to play rummy cash games online or want to scratch yourself a jackpot in our promotion. Deccan Rummy is a part of Deccan Games Pvt Ltd and is dedicated to providing players from around India, 13 card rummy games. Players around India worldwide can access Deccan Rummy online 24 hours a day, 7 days a week from any PC or Mac and experience the best multi-player rummy game online.