After close to 50 days of non-stop rummy and cricket action, the highly invigorating World Cup Leaderboard contest concluded last Sunday. Just like the action-packed World cup finale which ended in a stunning manner, our leaderboard contest too went down in a memorable way.

Given the colossal prizes on offer, the expectations for the contest were unmistakably high even since the day it was announced. Yet even with the glowing coverage the event received, the contest remarkably lived up to the hype it generated. The problem with leaderboard contests is that after a glistening start, some of them run the risk of getting faded out. As our world cup leaderboard was coupled with cricket and some of the hottest prizes were on offer, the contest was gripping all the way.

Rummy Leaderboards are Super fun. They are all about fame and big giveaways. Not only does the winner walk away with the prizes and bragging rights, but he/she also gets a long-standing reputation of winning one.

The 44-day grand spectacle which began on June 1 culminated on July 14 on the day, where cricketing history was made. Right from the day the contest was announced, users joined in droves to have their chance to grab some of the most alluring prizes they could get in a rummy contest. From hardcore grinders to recreational players who play rummy for fun, the field was extremely competitive. With an amazing structure and wonderful prizes to play for, the battle was intense with lots of changes in the leaderboard throughout the tournament. The action-packed contest saw lots of players leapfrog from their position each day.

Rummy Leaderboards are a reward for consistency. Every player wants to win a leaderboard race. They are chance to aspire for something big, something that is life-changing, and most importantly gives you a chance to enhance your reputation. That’s exactly what World Cup Leaderboard aspired for. As every week provided a fresh start and a new race to the top, a lot of players were vying for the top spot each week. 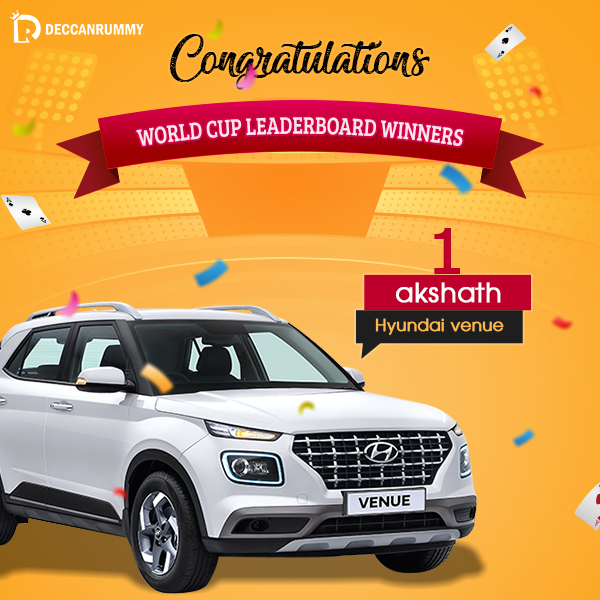 Not every player gets successful in chasing such a grand narrative. The player who pours his heart and soul and exhibits a sense of unflinching passion towards the game gets to top such races. Such a resolve was shown by our World Cup Leaderboard winner “Akshath” who won the leaderboard contest with 33386 points. The remarkable journey of Aksath who has been having a dream run of late culminated with a befitting World Cup Leaderboard victory. This consistency is what Deccan Rummy loves to reward. To maintain the lead in a contest that stretches for a month and a half requires tremendous resolve and passion. And that’s exactly what Akshath displayed by winning this leaderboard race.

For his spectacular effort in topping the leaderboard, Akshath will be rewarded with a Hyundai Venue as promised. The prize distribution ceremony is all set to be conducted shortly. Having won the contest of the season, Akshath is guaranteed to be remembered as an iconic player in the annals of online rummy.

Congrats to all the winners 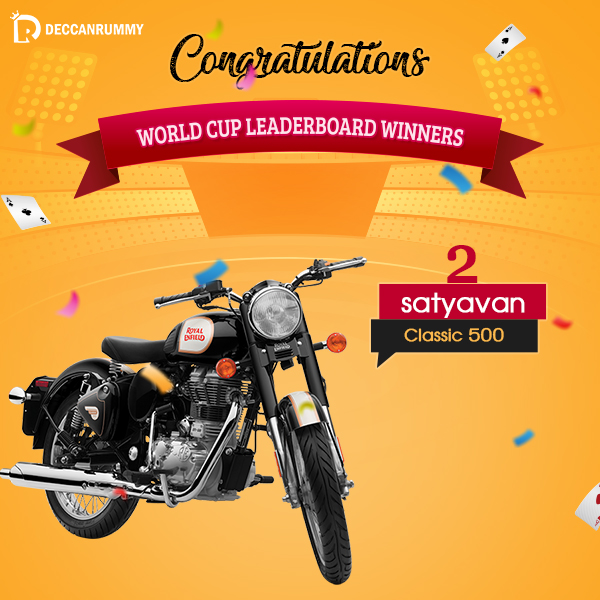 At the second place is Satyavan, who ended up in a second-place with 32750 points. The fact that Akshath won by a slender margin of 500+ points should indicate that the competition was intense. Despite putting his best foot forward, Satyavan couldn’t displace from Akshath and settle for the second position. Nothing to take away from his achievement, a win is in the reckoning for him shortly should he continue to play with a similar passion. For his efforts, Satyavan rides home a Bullet Classic 500.

With 32432 points, Shikha secured 3rd position. For securing the 3rd position, Shikha won iPhone 8 64GB. 17 other players won a cash bonus for their efforts. We understand not everybody can win the prizes as just 20 numbers are in for a chance. However, it was heartening to see players compete with much passion and verve in these contests.

Deccan Rummy congratulates all the winners in this leaderboard contest and would like to extend our warmest commiserations to those who couldn’t make the list this time around.

Most of the top rummy companies in India look for new ways to reward their users and Deccan Rummy, being one of the best rummy sites in the business, never misses an opportunity to enthrall users. We have several interesting rummy tournaments online and promotions lined up for the near future. You will always find something to play for in our website. If you have not yet joined Deccan Rummy, there couldn’t be a better time than now to join and make the most of the cash deluge!