Deccan Rummy continues to excite rummy players across the country with exciting Rummy tournaments and bonus offers. This Ugadi is no exception. Ugadi is the New Year for those who are living in the Deccan plateau in India and it marks the arrival of Spring Season. Ugadi is consider to bring prosperity in the lives of people, so it’s celebrated with much passion and vigor. It’s the time considered auspicious to start new ventures. On this day, celebrations include decorating the homes with colorful rangolis and strings of mango leaves that symbolizes prosperity. As always, preparation of mouth-watering cuisines that has Ugadi Pachdi, a unique dish that provides six different tastes. In these days of Home confinement, Ugadi is largely a family affair. 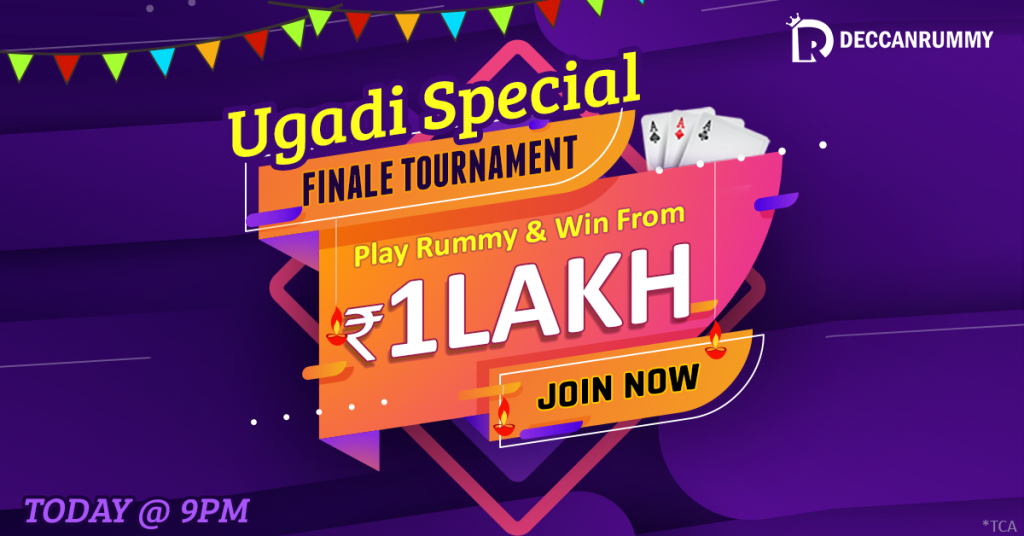 Ugadi Special Tournament which is running from Mar 23, is seeing some tremendous participation by rummy players from all walks of life. The tournament which is being conducted at three levels – SAtellites, Qualifier, and Finale is played by users in great spirits.

The satellites which marked the beginning of the tournament nearly saw a full house. With prize amount and ticket for the next stage up for grabs, Players as usual were fiercely competitive. The Ugadi satellites saw some exciting rummy action with players trying to outplay others with their skills. In the end, it was Virat 4 who stood at the top outplaying several other competitors with his rummy skills. For his fantastic efforts, Virat took home a good chunk of prizemoney and received free tickets to the next tournament. Aside from Virat, 46 other players received prizemoney and free tickets to the Ugadi Qualifiers.

Yesterday saw the conclusion of Ugadi Qualifiers, which saw players registering with the free tickets obtained from Ugadi Satellites and players who played with a buy-in of Rs. 100. It was business as usual with players fighting tooth and nail to emerge victorious. One-thing about these multi-level tournaments are, that they give the users several chances to win a prize. Even if you miss the satellites, you can directly join the Qualifiers and go for the finale. Ugadi Qualifiers was action-packed and in the long drawn out action, it was rknaidukoti, who took the top spot outplaying other players. In total, 100 players received free tickets to the finale.

Now is the D-day, the almost important tournament is here. The moment you’ve waiting been waiting for is now here! It’s time to turn this festival day into special day. Deccan rummy is giving you an option to make it to the finals even if you haven’t been a a part of the initial stages. Make a buy-in of Rs 200 to join the Finale stage that carries a prize pool worth Rs 50k. The tournament is a best entertainment for Rummy enthusiasts as people have to stay in house as it is a preventive measure to stay away from Corona. There’s a lot of exciting rummy actions you can enjoy at the grand finale. You could play against some of the best Rummy players in the country. Hot seats with hot prize pool awaits you ! Pull off a great starts to the new year.