Deccan Rummy special tournaments have always attracted the best rummy players across the country at all experience levels. Designed with the intention of providing the best prizes to players, our special rummy tournaments have received immense praise from the rummy community in the country. 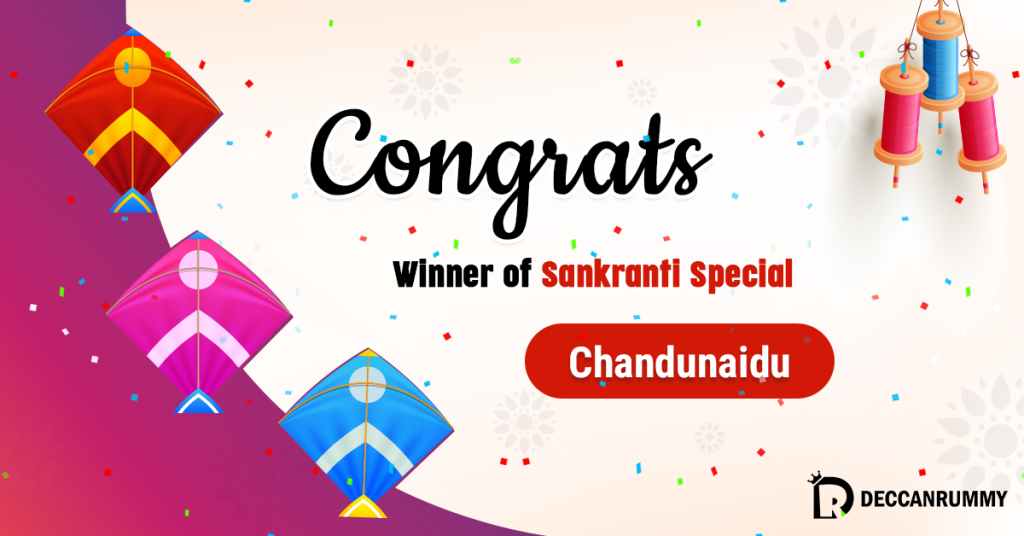 Last night the much anticipated Sankranti Special Tournament was held in our website. Since the day we announced the tourney, it was extremely popular among the curious. Players were genuinely interested to try their hand in this rummy tournament and availed free tickets to the tourney by making a minimal deposit of Rs. 500 in large numbers. Also, to ensure last minute entry, we also made a buy-in available for Rs. 200 for this tournament. To make sure every genuine rummy enthusiast gets to know about the tournament, we ran several social media campaigns.

The tournament started with full house participation with numerous players with a wide breadth of experience chipping in from all parts of India. Just like all Deccan Rummy tournaments, the rummy action was intense from the start with players’ displaying their skills wanting to win big from the big prizepool of Rs. 50000.

After a solid action that lasted for close to 45 minutes, it was chandunaidu who was able to overcome some stiff competition and prevail with his rummy skill. Coming on top of a star-studded field that involves amateurs, pros, and casual players is no easy. On his way to victory, Chandunaidu had to fight a strong final table that saw some Deccan Rummy veterans in action. Chandunaidu was able to pack a punch in his game and overcome every one of them. Winning a tournament of this stature also signals his arrival to the big league.

Congratulations to Kuttykarthi and Karthikabi for securing the 2nd and 3rd place respectively. They fought hard, but Chandunaidu was too good for the day. We at Deccan Rummy would like to extend our warmest wishes to all the three players for their involvement in this tournament. We would also like to extend our commiserations to players  who wouldn’t make the cut this time. As the old adage goes, there’s no substitute to hardwork . Keep trying; your day is not far off!

Considered as the fastest online rummy site in India, Deccan Rummy continues to excite rummy players across India. The rummy site is brimming with hot offers and promotions thereby offering plenty of opportunities for the players. Still not a part of Deccan Rummy? Register now to enjoy all