Indian Rummy is the most popular card game in India. Indian rummy card game is the unique combination of gin rummy and rummy 500. Also, called Paplu, the game enjoys great patronage among the audience of all group.

Most of us know how to play rummy as we’ve grown up playing the game at some point in our lives. Now gaming has moved from the physical tables to the virtual- rummy has spread its wings and has become even more popular. Now, playing rummy in the traditional way has diminished due to various factors, most of us have to turn to the online environment for our rummy needs. With this being the case, it is important to keep in mind a few things before stepping into the online environment. Here are a few checklists to follow before playing rummy online. 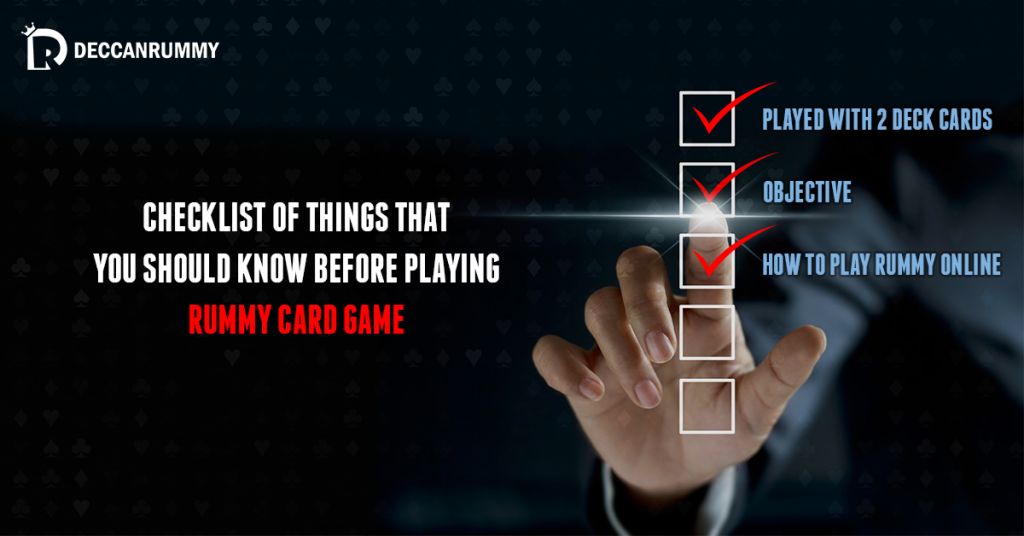 13 card Rummy game is played with a minimum of 2 decks of cards with jokers. 2-6 players can generally play the game. Most rummy sites have designated 2-player and 6-player tables for tournaments and games. Once the game commences, each player gets a turn to play his moves.

The objective of the Rummy card game is to arrange all the 13 cards into proper sets or sequences. Sequences are the three or more cards in a consecutive series belonging to the same suit 5♥ 6♥ 7♥.

Whereas sets are three or four cards of the same rank in different suits (A♥ A♣ A♦). For a perfect declare, you need two sequences, at least with one mandatorily being a pure sequence.

3. How to Play Rummy Online

13 cards are dealt with each player seated in the table. In each turn, a player draws either the first card from the open deck or the top card from the closed deck and discards a card from his/her hand into the open deck. The player can make use of the sort feature incorporated in most of the sites to sort his cards. The rounds continue until a player emerges victorious. The player has to place the last card in the finish slot to complete the game. The process of declaring the card is SHOW. For a successful show, the player needs to follow the rummy rules of declaring with two sequences.

4. What is a Joker card and how does it help in the game

Every card deck has a couple of printed jokers which can substitute a missing card to form a sequence or a set. Additionally, a random card is drawn and used as a wild joker. All cards of the exact rank in any suit similar to the joker are also Jokers in the game. If printed joker turns up as the wild card, the ace cards from the 4 suits turn out to be joker cards for the game.

5. Points in the rummy card game

As you can see, the rules are pretty easy to remember. If you are a newbie, you can probably learn the game within a day or two as get to the felts. Have good luck playing!