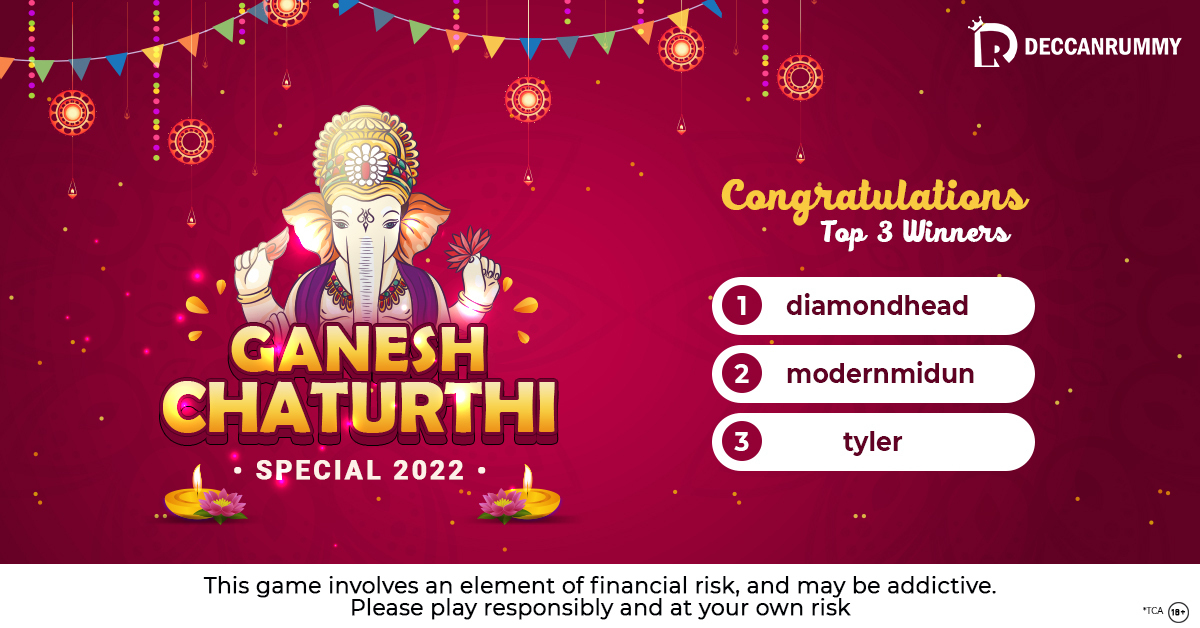 It was a power-packed evening yesterday as the Ganesh Chaturthi tourney went underway on our platform. With a mammoth prize pool of Rs. 5 Lakhs, the tournament was action-packed right from the beginning. conducted in the multi-level format, the tourney saw some exciting action even in the satellites and Qualifiers before things heated up in the finale.
In the Finale, things were exciting right from the word go. With players joining with free tickets and buy-in, the tournament was exciting right from the beginning with players competing for a massive share.

Diamondhead comes out on top

The journey ended with player “Diamondhead” navigating his way to the top to claim the victory. Congratulations to Diamondhead for his spectacular performance which brought him this glory. It was his relentless passion for the game which brought his massive victory. For his stupendous efforts, he takes home a solid cut from the 2.5 lakh prize pool as well as bragging rights that he could boast on.

Special congratulations to players “modernmidun” and “tyler” for securing the second and third positions respectively. Both the players have been around in the tournament circuit impressing everyone with a solid performance of late. By capturing the top three slots, these three proved that anyone could land at the top provided, they master the rummy rules and stick to their game plan. The payday is not far off!

It is understandable that not everyone can win prizes in tourneys such as these but with your fierce fighting spirit and passion you displayed, you’ve won many hearts. And the day of you becoming a crowning champion is not far off!

With the festival season all set to begin in the next few days, we’ve some extraordinary plans this season to celebrate it brightly. We have a proven history of conducting these tournaments on a grand scale. The winning opportunities are all set to come in the next few moments. So, stay tuned and keep watching this space for lucrative promotions. Thanks to everyone who participated in this tourney and made it a grand success!