Big tournaments and Deccan Rummy go hand in hand. Whenever you think of big tournaments the first name that comes to our mind is Deccan Rummy. True to our tagline of being the “Truest Rummy sensation”, we have hosted some of the most memorable tournaments in the Indian rummy history.

Playing card games like rummy during Indian festivals have been associated with the Indian culture for ages. Diwali is incomplete without card games. With the busy schedule that we are running constantly, playing live rummy has become a rarity. It is no wonder, tournament rummy has seen a massive hike in recent times. With arranging offline rummy tournaments becoming difficult, online tournaments have attracted the people en masse. The idea of a bigger return on no investment or with a small entry is proving too enticing for any rummy player. While plenty of hopefuls join these tourney with hopes of a big, only a select few are able to do it as cracking tournaments require a high degree of skill. 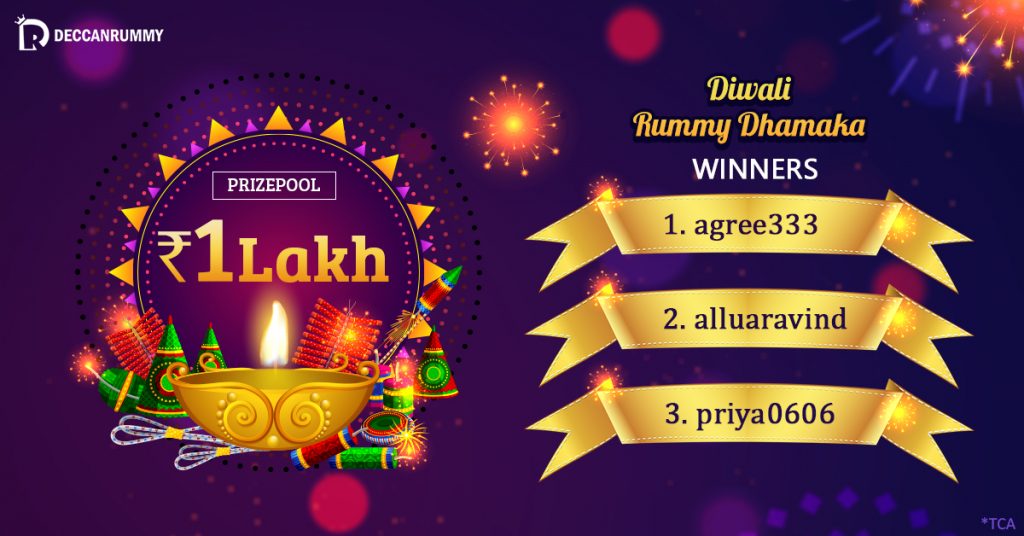 Last Sunday the Most anticipated Diwali Dhamaka freeroll went underway here at Deccan Rummy’s platform. Just like all our special tournaments, the turn out was great. As the tournament was open free, rummy players across the country swarmed in huge numbers. The field had some well-known names in the rummy circuit. Players from all walks of life, all experience levels were in the field.

As expected, the action was intense right from the first round. Some big names who were expected to cruise along were knocked out in the subsequent rounds. After some solid back and forth action, it was agree333 who shipped the prestigious Diwali Rummy Dhamaka Freerolls.

Agree333 showcased some of the finest rummy skills to win this Rummy tournament. Coming on top in a field full of veterans and former champions is no ordinary achievement. Congrats to agree333 for pulling it off picture perfectly. This win is certainly a big win in his rummy career and one of the most prestigious ones too. With this huge win, agree333 is making people take notice of him in the rummy circles and is a force to reckon with.

It was not easy for alluarvind and priya0606, when they had to battle against the intelligence and resolve of a player like Agree333. For their splendid efforts, they secured second and third position respectively.

Lots of players across the country played the game spectacularly. Not everyone could crack the tournament this time. However, your days of glory are not far off. Keep digging in for fruitful results.

You could be the next winner of a mega tournament. Visit DeccanRummy.com, India’s most trusted rummy site, to check out more such exciting promotions and offers.