A special tournament was held last week on to mark the celebration of Ganesh Chaturthi at Deccan Rummy. The celebration was big enough for our players to have a great festive time. The 3-day tournament went off very well. Initially, there was a huge expectation among the players about the tourney ever since the announcement was made. 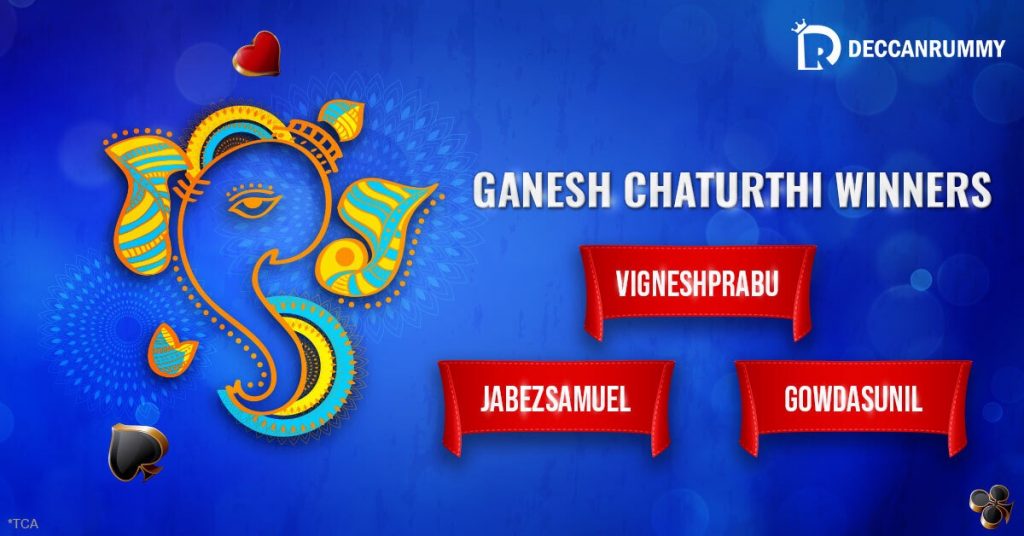 It is more of a routine for Deccan Rummy players to celebrate an Indian festival with the 13-card Indian Rummy. Deccan Rummy has a lot of unbelievable rummy promotions under its name. The site has something special for its players on all special occasions. The special serve has Rummy tournaments, Rummy leaderboard contests or even as bonus promotions. This is one of the main reasons why the site has become Indian Rummy players’ favourite online rummy destination.

The site is a class, and the service is unmatchable. The exciting card game has a great following in the country, making the game a huge one in the Indian gaming industry.

Ganesh Chaturthi is a very special festival in India. The day marks the birth of Lord Ganesha. On the auspicious day, the whole country turns much energetic and colourful in celebration. People pray Lord Ganesha to bring home good fortunes. The tournament was formatted for a three-day show for a tournament prize pool of Rs 1 Lakh. The tournament ran from Aug 20-22, starting off from the satellite then followed by the qualifiers and the grand finale. Securing top positions in one level of the tournament will get free tickets to play the next level of the tournament.

Players can also join the different stages of the tournament with the prescribed buy-in amount. Seats got filled within a few minutes when the registrations were open.

After a lot of close nail-biting encounters, the winners’ list finally got ready. The list wasn’t a predicted one. Vigneshprabu became the winner after a consistent performance at the tables. He showed complete dominance throughout the contest, making him a deserved person to top the list.

Following him were jabezsamuel in the 2nd and Gowdasunil in the 3rd. Hearty congratulations to all the winners and all the best for the rest to do well in the upcoming promotions at Deccan Rummy. Stay tuned! There are many more to come!