Inspector Chulbul Pandey- “Robin Hood” Pandey is back in action, once again in the hunt to win his enemies. The Fearless Cop is expected to break through all the blockbuster records. It’s been ten years since the first part of the Dabangg series released. With a lot of talk across the country about the movie, here’s a blog about the journey of Chulbul Pandey in the past decade. 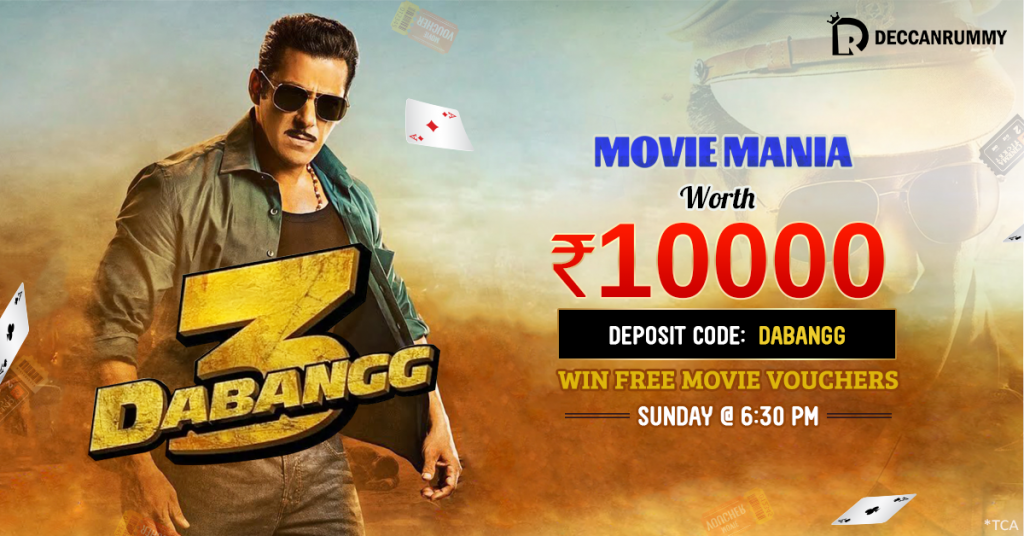 Dabangg 3 has hit the screens today and is receiving good reviews across the nation. There is a lot of excitement about Salman Khan’s film Dabangg 3. The film has the advantage of coming from a strong franchise that has a great box office record. Helmed by Prabhu Deva, a new addition to the franchise and the one who is known to have given some power-packed films in the past, the Dabangg fever is running high. The film has been the talk of the town ever since its announcement. The makers and Sallu Bhai himself have left no stones unturned to promote their movie. If you are one of those Salman Khan that can’t wait to see your matinee idol flex his muscles and beat up the baddies, here’s how you can do so easily.

To all the Salman Khan Fans and movie lovers, Deccan Rummy is making it easy for you to watch Blockbuster throughout the year, and this week is nothing different. Deccan Rummy is giving out free coupons to Dabangg-3 this Sunday at the Movie Mania tourney. Movie Mania is a special tournament at Deccan Rummy every Sunday, and the winners get to win free movie coupons to movies releasing that week.

Here’s something you got to know about the Movie Mania contest: