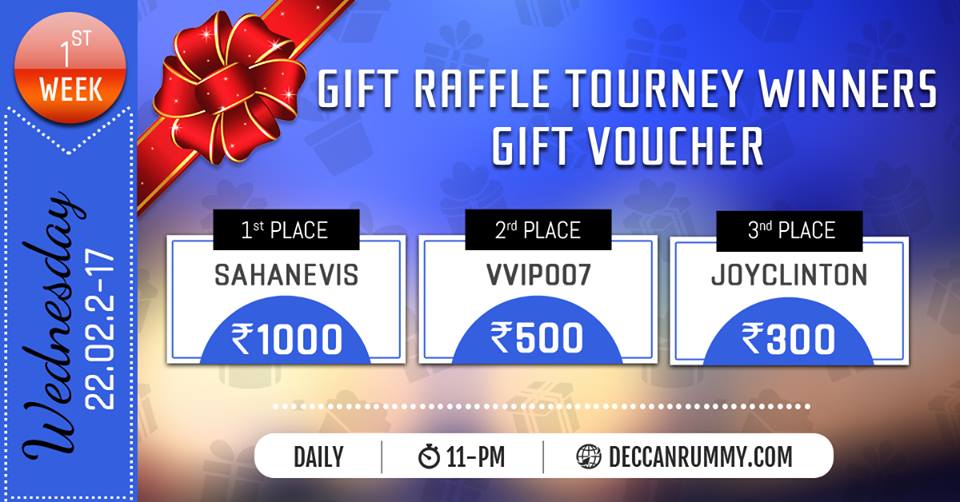 DeccanRummy.com has recently launched our daily GiftRaffle tourney. It is a free roll rummy tournament that is being conducted every day at 11PM. The tournament is currently witnessing a tremendous response with seats going full most of the days. The total prize pool in this tourney is Rs. 1800 which is given in the form of giftVouchers. The winner of this tourney will get Rs. 1000.00 worth e-shopping Gift voucher, the runner up will get Rs.500 movie voucher and the person securing third place will get Rs. 300 worth movie voucher.

Sounds pretty simple right? The heartening fact about this tournament is many new players are winning it every day. The tournament has percolated across different parts of India and we have winners across India daily.

Be sure never to get bored again. Just log in and play this awesome GiftRaffle tournament for fun, thrill, entertainment and win some really cool gift vouchers!

Aren’t you excited about these amazingly wonderful tourneys? You must be! Grab this wonderful opportunity & conquer your opponents in an authoritative fashion. Players can refer rummy rules and how to play rummy tutorial in our site for a better understanding about the game.