The Navratri festival has officially begun. The unique thing about this festival is the diversity it displays – while in the north it’s celebrated as Ramlila, in the east it’s called Durga Puja and down south it’s called as Golu. In-spite of the differences in the way it’s celebrated, it brings about a sense of oneness in the final day in the form of Vijayadasami festival. As people across the country celebrate this 9-day festival with much passion and fervour, we are out there to make it more memorable with a spectacular tournament. 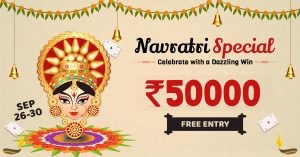 As you might be aware, We are holding Navratri special tourneys from Sept 26-30.Boasting a giant prize pool of Rs. 50000. This tournament is a freeroll tourney open to all Deccan Rummy players. The prize money for this tournament will be given in cash bonus. The Cash bonus would be instantly credited to your account once you win.

The special tourney runs from Sept 26-30 with each tournament scheduled at 3:30 PM so that you can allocate the evenings to spend the festival in the manner you wish. Celebrating a festival with a victory behind your bank and with some prize money would be surely exciting, right?

So ahead, start refreshing your rummy skills now by playing our daily freeroll tournaments so that you get some tournament practice. You don’t want to appear raw in such a big stage, do you? Aside from harmonious bhajans, and songs, dance has also been an important part of this festival. It isn’t uncommon to see people perform garba and dandiya during Navratri evenings. Get your Dandiya sticks ready! It’s going to be super-awesome when you dance with a win in a spectacular rummy tournament like this. If do you have an account with Deccan Rummy, register yourself for free now and be a part of this awesome tournament.