We, Indians absolutely love to play online rummy. However, if you ask about the history of Rummy, it is not an easy task to answer.

Many different theories surrounding the History of Rummy are in fact referring the origins of the Rummy games. However, in reality, probably over the years the modern day rules are an amalgamation of various different rummy games. Rummy is a family of games that share a similar structure. All these games include a similar gameplay pattern that consists of drawing and discarding a card during each turn.

The origins of the Rummy games go back a couple of centuries. The theories surrounding the origin are:

The first theory is that Rummy evolved from a game called “Conquain”, which itself originated in either Spain or Mexico. It’s believed to be invented by the Spanish and brought to America by Spanish immigrants. According to the theory, this was the very first example of rummy and all other forms effectively stemmed from it. It’s believed to have spread throughout America during the 19th century before reaching England, where it was given the name “Rummy”.

The second theory is that Rummy evolved from a particular form of poker known as Whiskey Poker. It was stated that Whiskey Poker was very similar to the game of Rummy that we know today; it was subsequently known as Rum Poker and then eventually Rummy.

The third theory is that Rummy originated in China at some point during the 19th century, starting out as a game called Khanhoo/ Mahjong. Soon many Western variations of Mahjong appeared and a common assumption is that the game mutated following the swift spread of Chinese immigrants to the West.

Egyptian Origin- There is a strong belief that Rummy was originally evolved from the ancient “Egyptian card game”. The object of the game is to achieve most points by assembling pictures (Trios) of ancient Egyptian treasures. The rummy deck contains 45 cards made up of 5 color-coded suits, with each color-suite containing 9 cards.The 5 color-suits are: 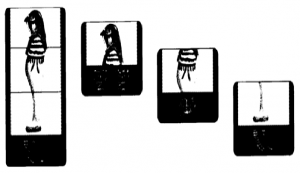 American Origin- The special literature on Rummy records that Rummy is an American invention, and originates its name from the rum, the drink. Coon-can appears to be the first member of the large family of the Rummy games, which was first played in the southern areas of the United States of America and in Northern-Mexico. Rum was the popular drink of the region, and the losing party paid in rum to the winner according to some studies. The meaning of the original word is definitely originated from rum. In the United States of America, it is a common thing to differentiate certain games by using a name of an alcoholic drink. For example, in poker terminology whiskey, gin and rum are commonly used as prefixes.

Hungarian Origin- The presence of Rummy in Hungary was first reported in newspapers after WW1. The game presumably appeared earlier – around 1915 – at the tables of coffee shops in Pest, and gained over players from other popular board games at an immense speed. Due to its simple, easy to learn the rules it has soon become an addiction.

It’s difficult to trace the exact history of the game, but it’s fair to say that rummy in one form or another has been played for a very long time. It’s very possible that there’s some truth in all of these theories. Regardless of exactly how the game came about, it has certainly stood the test of time and has been enjoyed by generations of card players.

In the earlier days, owning a deck of cards was something only the rich and elite could afford. The cards that we use now to play card games have evolved to the current state after many modifications. They were initially handmade and each card was painstakingly painted. The evolution of paper and printing techniques is what has made the packs of cards so easily available. 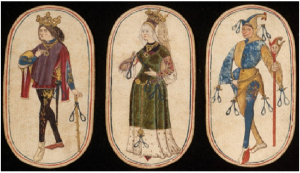 It is widely believed that the history of the name “Gin Rummy” came from the inventor’s love of drinking Gin. The game became very popular in the 1930’s and was played extensively by the famous movie stars in Hollywood as a quick game to play between filming.

The popularity of Rummy was further increased during the Great Depression when people tended to stay indoors and entertain themselves by playing games rather than partake in other forms of expensive entertainment.

Origin of the name “Rummy”:

Where did the name “Rummy” come from? No one knows for sure, although there are a few theories:

David Parlett has an amusing quote regarding the history of Rummy and it’s possible relation to the drink “rum”:  “The origins of Rummy would, therefore, appear to be lost not so much in the mists of time as in the alcoholic haze of history!”

These days, Playing online Rummy is very popular and offers players the chance to play many versions of rummy online, in their own homes regardless of the time of day. This has ensured the increasing popularity of Rummy and will continue to do so.  The number of people who play rummy card games is increasing day by day due to his popularity.

Perhaps we are only witnessing the beginning of the History of Rummy!