Holi, the festival of colors is just a week away. The festival is referred to as the most vibrant Indian festival because of the joy and fervor with which it is celebrated. If you are visiting any streets of North India during this season, it’s best advised to carry with you a set of additional clothes. During Holi season, people crowd on the street and splash brilliantly colored dyes on anyone that’s passing by.

The festival celebrates the triumph of good over evil. In the midst of the coloring spree, consumed are some mouth-watering delicacies like gujiyas, malpuas and puran polis. Though it’s primarily a Hindu festival, with the sheer diversity and culture our country has, people from other religions have also embraced the festival and are partaking in the festivities. Truth said the joy and verve of Holi are unmatched when compared to other festivals. 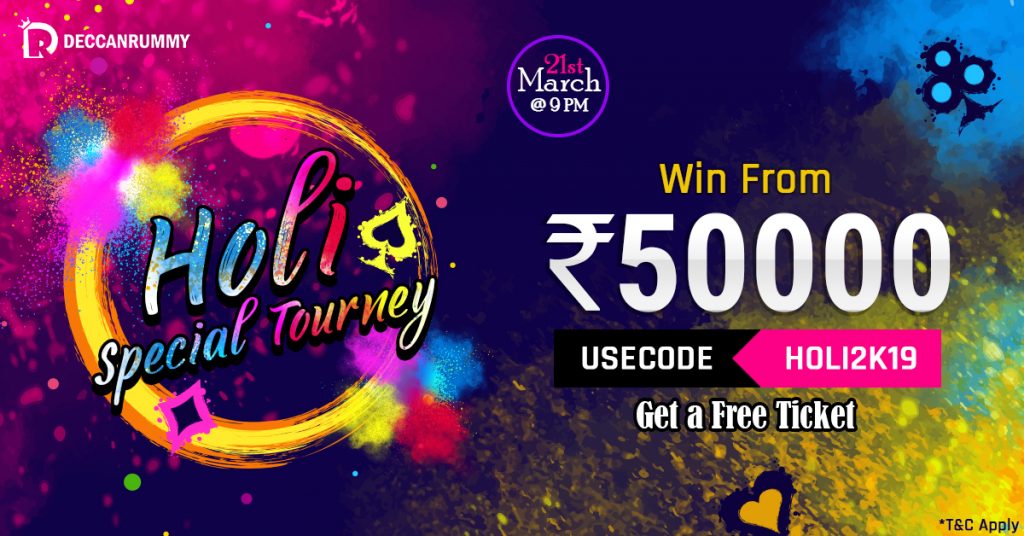 To celebrate Holi in a grand fashion, Deccan Rummy is hosting a Holi Special tournament on Mar 21 at 9 PM. Last year, we added more grandeur to your Holi celebrations with our Holi Special tournament. That tournament saw participation from a broad range of players from all walks of life and was a massive success. This year, too look out for that extra joy and splendor with this awesome tournament.

In the previous edition, Susan33 emerged victorious, cruising through a field of 1030 players and took down the first place. 71 other players were paid out in the tournament.

How can you participate in our Holi Special Tournament?

Coming with a hefty prize pool of Rs. 50000, the tournament is open to all. All the players need to is deposit Rs. 500 with the code “HOLI2K19” in order to grab a free ticket for this tournament. Isn’t that really awesome? Your Rs. 500 stays in your main balance using which you can play a diverse range of rummy games and variants and you get a free ticket to have a shot at 50K Holi tournament. It would definitely make for a marvelous story.

Alternatively, players can also play this tournament at a relatively low buy-in of Rs. 200. The registration for the tournament opens on Mar 21 at 6:00 PM.

The Rummy community in India is growing at a rapid pace. More and more digital footfalls are set each day in the brimming rummy community. Players seem to have found a unique penchant for the mind-sport, and while each of us strives for the ultimate glory, only one manages to do it effectively. It could be even you provided you get your act together perfectly and play your cards right at the right time!

Holi Special Tournament is guaranteed to attract a massive field of players – from novices to pros. We expect it to be a full house just like all other Indian rummy tournaments. We promise to add more colors to our Holi celebration!
Players from all walks of life are going to come together in our seamless gaming environment and fight it out for the big share of Rs. 50K.

With the cool IPL contest “Rummy Fantasy League” also starting around the same time, these are great times to be a rummy player at Deccanrummy.com. Save the date. Remember on Mar 21 – be there on our vibrant tables to participate in the extravaganza!