DeccanRummy.com is extremely to announce the tremendous success of our Holi Special  Tournament 1 on Mar 3. One of the easiest to build your bankroll, freeroll tournament attracts every rummy enthusiast out there. The chance to win huge amounts without investing a dime plus the easy tournament structure pulls so many players to play Freeroll Tournaments conducted in online rummy sites.

Online rummy tournaments have the same adrenaline pumping action as much as the real rummy games and tournaments. The players who fight valiantly till the end going through some breathtaking grinding sessions usually come out on top. 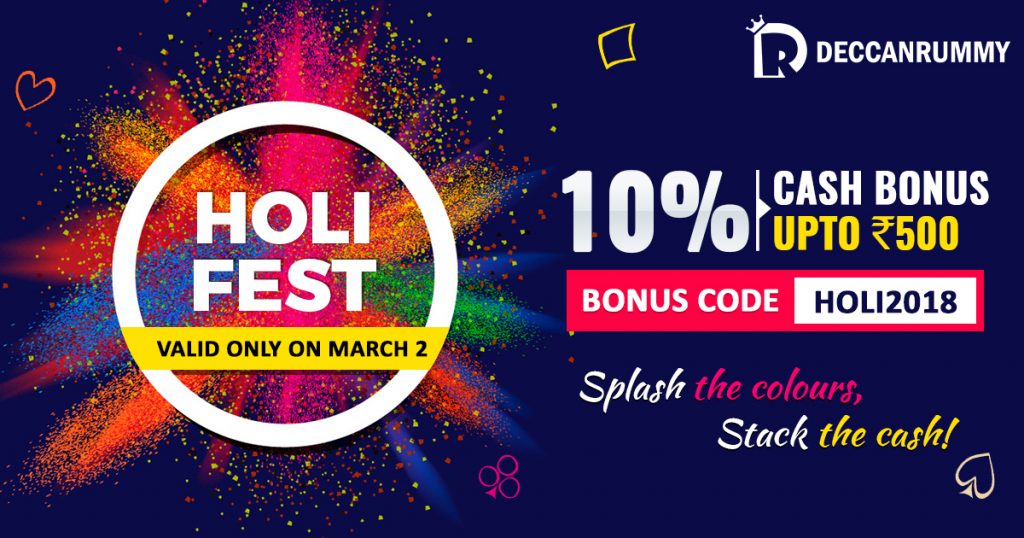 The action was furious right from the get-go with players deploying every trick in their books to outplay their opponents. After a tough fight, it was a pleasure to see Susen33 juggernaut to the top. It’s indeed a great achievement to finish at the top in a tough field such as this as these tourneys see participation from the likes of rummy novices to the experts. We at DeccanRummy.com want to congratulate Susen33 on this historic win and we hope Susen33 gets to win many other events in the future. Apart from Susan33, 71 other players received cash bonus prizes.

About the Tournament, ThamaraiKannan, Head of Operations said “Congratulations to Susen33 on winning the top prize. Keep playing we strongly feel you are destined to win even bigger contests in the future”.

He further added “Special Tournaments hosted at DeccanRummy are always challenging and pushes the players to their limits. The craze with which players participated in this tournament was touching. This kind of turnout gives us the spirit to increase our giveaways every single time for players to compete every day”.

Do step in tomorrow

Summing it up, DeccanRummy’s Holi Special Tournament 1 today was a grand success, thanks to our players. As to the players who couldn’t make the cut today, know what? There’s another Holi special tournament 2 open to players tomorrow @ 3:30 PM; This tournament is a freeroll and comes with a prize pool of Rs. 20K Cash Bonus. Every player with a Deccan Rummy account can participate and try their luck.

This is what we call an extended Holi Celebration. If you are ready to make it big, do not forget to be a part of the incredible action. Aren’t you hungry for success, yet?