A standard deck consists of 52 cards with two more cards i.e Printed Jokers. Also called as a wild card, the joker serves different purposes in different card games. In rummy, jokers act as a replacement for the required cards in melding sets or sequences. In 13 cards Indian Rummy, the objective is to meld all the 13 hand cards into proper sets & sequences. Jokers come in handy to reach the objective.

Joker Card has a rich place in Rummy history. The joker card that we see when we purchase a card deck has its origins in Euchre game in the 19th century when there was a consensus among players that an extra trump card was required. The game of Euchre was extremely popular at that time and American Euchre players when modifying the rules sometime during the 1860s decided that an extra trump card was required to spice up the game. Originally called the Imperial bower, the card came to be called as the joker in the later half of the 19th century as the card manufacturers were making it with depictions of clown or jesters.

Jokers or wild card is a card generated randomly at the beginning of the rummy game that can take the place of any card in a run or a set is called Wild card. As it is highly improbable to meld all the 13 cards dealt into pure sets and sequences, Jokers come in handy as they act as a substitute for the card missing in a set or a sequence.

Usage of the wild card
A Joker is randomly auto generated at the beginning of the game and it can be substituted for any card while making a set or sequence eg: Suppose if 6♠ turns to be the wild card, you can use of 6 from any suit while making a set or a sequence. 2♠ 3♠ 6♣ is a valid sequence since 6 is the joker.6 can be used as a substitute even while making a set. Eg: 8♦8♦6♥ is a valid set.
One or more Wild cards can be used to complete a game
Joker play a very important role in a rummy game as it increases the chance of winning. You must know how exactly to use the card to meld proper sets and sequence so that you can declare show at the earliest.

Types of Joker
We all know joker plays a very vital role in the game of online rummy. Now let us discuss in detail about the two types of joker cards that will help us to attain our objective.

Printed Joker
In every deck of 52 cards, there are 2 more cards in the pack with printed cards. This is called the printed joker and is used to complete another set after a pure sequence is done. Jokers do not have any standardized appearance and the depiction of it varies across different manufacturing companies. The card manufacturing companies trademark their joker cards with arts depicting popular contemporary culture. Most Cards manufacturing companies have retained the clownish portrayal of this card as mentioned in the image below. 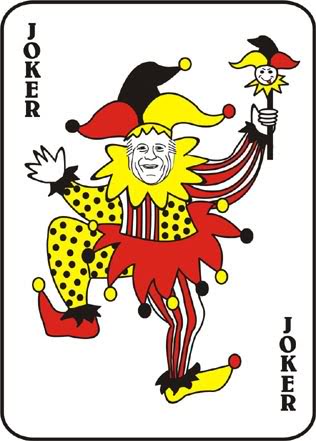 In case a printed joker is selected as a wild card, then ace card (A) of any suit can be used as a joker.

In the game of online rummy, a card which is randomly selected as Wild Joker in the beginning of the game is called as the Cut Joker. All the cards with the same rank of all suits will become as cut-joker in that game. For example, if 8♣ is selected randomly as the Wild Joker, then apart from 8♣, 8♠, 8♥, and 8♦ become the joker that can be used as a replacement card for melding a set or a sequence.

Please ensure that in order to declare show in the game of online rummy, you will have to have one pure sequence at least. Three or 4 cards of the same suit without joker can be referred as the Pure sequence. 3♠ 4♠ 5♠ is a pure sequence.

Now that you must be clear about the role of wild cards while playing rummy, use the joker card prudently. We have seen some players drop the joker cards due to a lapse in concentration, which proves too costly especially while playing cash games. Remember to stack your joker card as it may come in handy during the subsequent rounds. Drop it only when you are sure that you’re going to declare.

If you find this article interesting, do not forget to share, like this using the facebook button given below. If you have any queries on the game or tournaments, feel free to contact us at support@deccanrummy.com