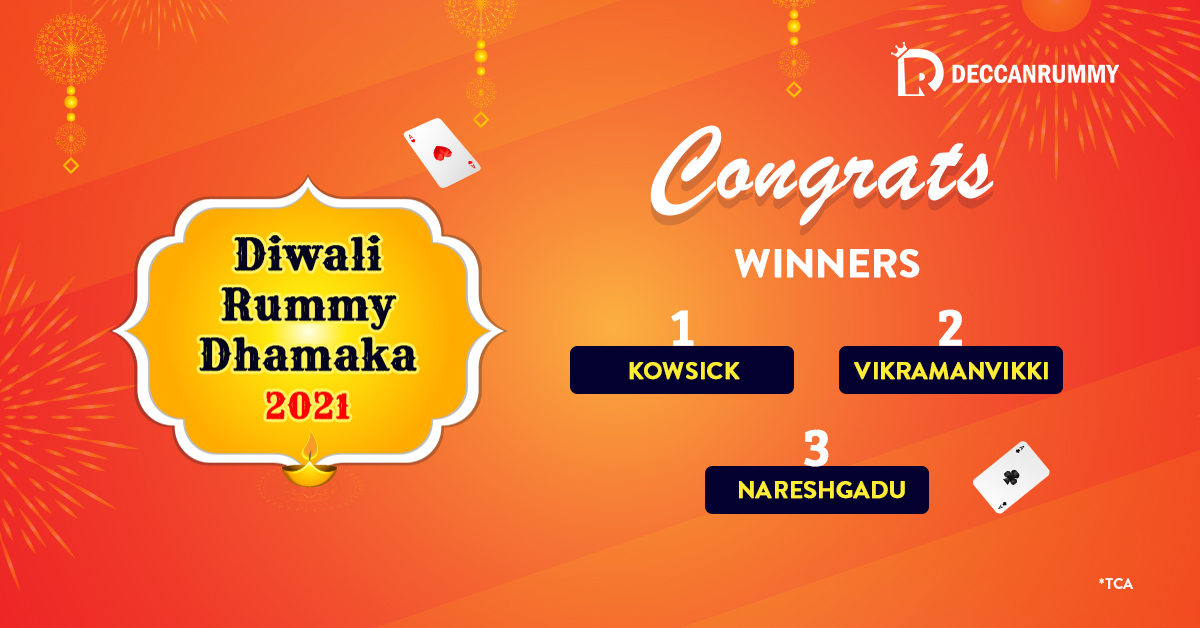 The festival of lights got over in the most electrifying way possible. As the whole country is reeling from the havoc of the pandemic and subsequent lockdowns, this Diwali provided a perfect platform to break free from the shackles. Setting more explosion to the festival, we launched the Diwali Rummy Dhamaka Special tournament.

DRD is a regular offering from Deccan Rummy over the past few Diwali Seasons, so, the excitement was palpable. With a spectacular 2 lakh prize pool up for grabs and the tournament being multilevel, people lined up in huge numbers to participate from all parts of the country. Keeping the festive spirit alive even after the festival was over was this Special tournament for Diwali from Deccan Rummy.

At a time when Diwali excitement is at its peak, the players were visibly excited to be a part of this grand extravaganza. The active participation of the players indicated that there is no dearth of talent in India. After five days of exciting rummy action, things got to the final stop yesterday when the finale unfolded in our platform.

Normally, a tournament of this kind attracts top talents across various parts of India. It’s no wonder that the finale was action-packed and pretty thrilling from the start to finish. Every round in the tournament was extremely competitive with some top players over the years joining the race. In the end, it was the user KOWSICK who outplayed the top players to emerge on top to win the tournament.

It was a stellar effort from a rookie to win such a competitive field that included many previous champions. Deccan Rummy team extends our warmest congratulations to the user Kowsick for his supreme efforts to win this awesome tournament. By winning this tournament, Kowsick has announced himself into the big league and would be a force to reckon with in any of our future events.

After fighting harder in this tourney putting their full efforts, Vikramanvikki and NareshGadu secured the second and third spot in this tournament respectively. It is quite understandable not everyone can become a winner. However, it did not stop many players from trying their hand out. Deccan Rummy team wishes everyone who participated in this special tournament and made it a grand success.

As India’s best rummy site, we always strive for a perfect balance between player needs, occasions, and giveaways. If you missed being a part of our grand Diwali Party, no worries! With Christmas and New year following shortly, we have so many exciting promotions in the pipeline. Stay tuned to our site by regularly checking our promotions section.