Rummy is one of the most widespread card games played in India. What makes rummy an outstanding game is its interesting game play. Indian Rummy rules are pretty simple to learn. The essential rule of the game is to get rid of the hand cards by melding them into proper sets & sequences. The player who first completes this task wins the game. The game requires a lot of memory skills to remember the fall of cards and complete focus and involvement. Perhaps, this is the reason why the game has such a huge following in India. 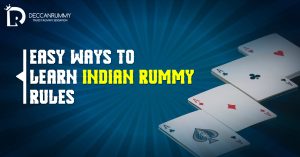 The objective of the game is to meld the 13 cards into proper sets and sequences with at least 2 sequences out of which one must be a pure sequence.

The basic idea of the game is to improve your hand by way of growing sets and sequences. The game is commonly played between 2 to 6 players; normally in a game involving more than 2 players, two standard 52-card decks and 4 joker cards are used. The playing cards are shuffled together and dealt with the players. After 13 playing cards are dealt with each participant the remaining cards are placed face down to make the ‘Closed Deck’ and the top card is placed on the desk face up making it the ‘Open Deck’. A card is randomly chosen from the ‘closed deck’ which acts a joker (Eg: If 6 of spades is selected as a joker, all the cards with the rank ‘6’ will act as a joker irrespective of the suit).

In rummy, you form a set when you meld 3 or four cards of the same rank in distinct suits (Eg: ♠8, ♥8, ♣8 is a proper set because the rank of the three cards are the same and the suits are different. A player can use the joker card as a substitute to complete a set.

Also called as run, a Sequence is a series of three or more consecutive cards of the same suit. (Eg: ♠3 ♠4 ♠5♠6 or is an example of a sequence). There must be at least one pure sequence to win the game. The sequences that are made without a substitution of Joker card are referred to as a pure sequence.

A joker is used as a substitute card to make up for the missing card in a set or a sequence. 2 joker cards come along with the standard 52 card deck. In addition, a random card is chosen which acts as the wild card. Players can use this wild card in place of a missing card while forming a set, and/or a sequence.

All printed Jokers that come along with the deck and an arbitrarily chosen wild card can be used as Joker in rummy.

In order to make melds, you must pick up a card from the Open or closed deck, make your melds, and then discard one card into the open deck.

Learn Indian Rummy rules thoroughly and can start playing in our practice tables. Keep playing practice games until you’re confident to play cash rummy games. So, what are you waiting for? Hit the tables and start having fun.