Uffff! Yesterday was a great day indeed! Holi 2021 was a lot more fun at the same time, secured enough to stay safe. More than get-togethers, fun parties, colour bombs, there was a huge event happening in the country over the last three days. It was Deccan Rummy’s special Holi tournament. 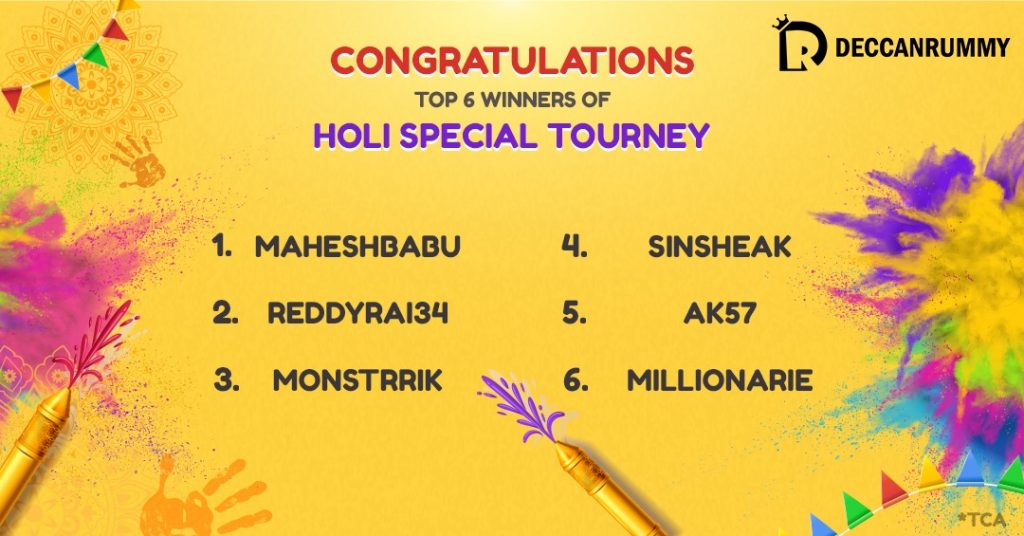 The site is consistently hitting Indian Rummy players with fabulous rummy promotions, including rummy tournaments, rummy bonuses, rummy leaderboards. It has been a regular practice for Deccan Rummy to enlighten the festive mode among Indians. The site is hosting special events on all special occasions. People have carried home huge rewards this time too.

The Holi 2021 special rummy tournament is worth Rs 1 Lakhs. It sounds like the best way to celebrate the colour festival, right?

The tourney is split into three levels of contest- Satellites, Qualifiers and Grand finale. The best part is yet to come; people winning in the contest’s initial stages will win free entry tickets to play the next level of contest. Special Tournament was played from March 27-29.

Last night was a hunt for 50K at Deccan Rummy. The registration started at 3 pm, and the seats got filled faster than ever. Top players from our sites showed great spirit in battling out for the crown. The players’ track records were so impressive that it wasn’t easy to predict one from the list. “Maheshbabu” was the champion last night.

It isn’t that easy to win such a huge tournament. Maheshbabu deserves a lot of applause and congratulations for this stellar achievement. Hope he continues this good run in the future.

There’s another player who deserves equal wishes, reddyrai34. He missed out the top slot by a whisker. Anyhow he settled out at the 2nd spot and won Rs 2816.

monstrrik won the 3rd place. Reddyrai34 and Monstrrik both played their heart out but had to settle for the second and third spot! With their current form, we can only hope they can clinch some big titles in the forthcoming days

We thank everyone for participating in our Holi Special tournament and making it a grand success!