India’s largest 13 card rummy game online site Deccan Rummy celebrated Independence Day in a big way by organizing our freedom special tournament on Aug 15. Right from the day, we announced the tournament, it has generated immense interest all around in the rummy community all over India. The statement holds true that every rummy player is more interested to prove their mettle in a big platform with a large number of players than settle for cash games where he/she plays against a limited set of players again and again.

We actively promoted the tournament through our social media channels like Facebook and Twitter and players too responded enthusiastically with their active participation. The tournament was announced with a prize pool of Rs. 1 Lakh cash bonus and was open to 899 players. Players who deposited Rs. 1947 or more with the bonus code were granted free ticket to the tournament. Players also had an option to play the tournament for a buy-in of Rs. 150.
As soon as the offer was displayed open to the public, players swarmed in huge numbers to make the deposit to get the free tickets. A total of more than 500 players availed the free tickets and the remaining players availed the buy-in to secure a place in the tournament. The tournament started full house and just like all our special tournament was fiercely competitive and gripping right from the start till the end. 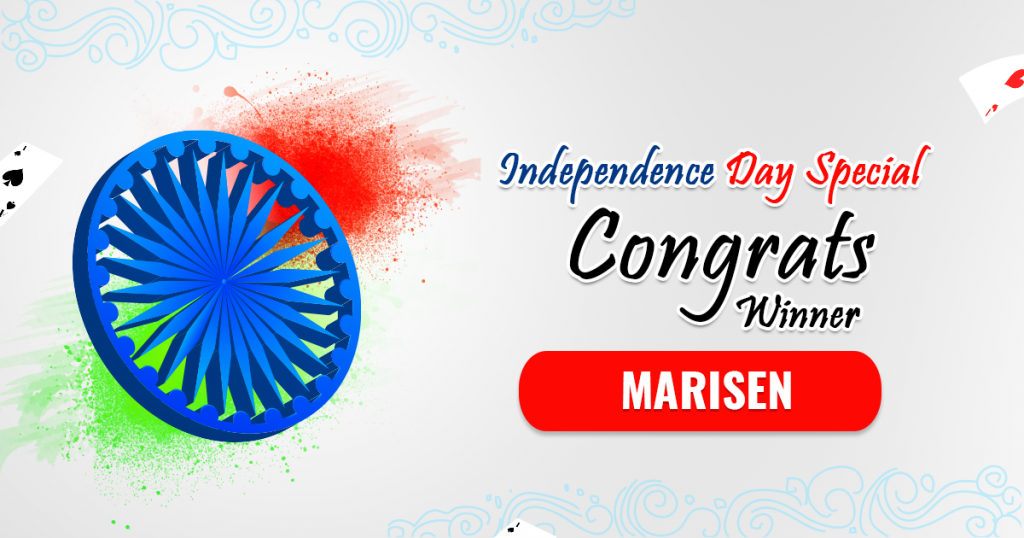 Outlasting everyone of them was Marisen who had the patience and resolve to go through 12 rounds of hard rummy action to emerge as the winner. Deccan Rummy extends special congratulations to Marisen for playing and winning the game in the right spirits. Winning a tournament like this that features players with experience from all level requires special expertise and Marisen was in his elements to outlast everyone in the thick of the fast-paced action. Hitting right spots in every single round requires special talent and high concentration levels, Marisen was certainly ahead in both these departments.

A lot of people tried hard but none could match the level of Marisen. Special congratulations to KalyaniKalyani and Babashaik for holding their nerve and trying to match up to the exemplary standard set by Marisen, for their stellar efforts they were able to seal the second and third spot in this tournament. A lot of other players also won cash prizes as the special tournament like this usually sees a lot of prizes given away. Some of them tried really hard but were unable to win any prizes, Deccan Rummy extends our heartfelt commiserations to them for their stellar efforts. We foresee some of you winning such a tournament in the near future. All it requires is some additional efforts and you can expect a guaranteed success in the tournament.

Freedom Special was yet again a successful tournament that saw many renowned players battling it out for the top spot. Many novices and rummy veterans participated in the tournament thereby maintaining the reputation of DeccanRummy as India’s number one online rummy site for hosting rummy online tournaments. We are planning to host many other tournaments in the near future with such massive prizepool. Stay tuned ahead for exciting times