Deccan Rummy is set to host a brand new special rummy tournament. Get ready to play for a bigger prize pool. May Day Moneymaker is the tournament name will be live on April 29 and will finish on May 1. Massive prize pool of 1 Lakh for the three-day tournament. Being the very first edition, the tournament is much anticipated among the country’s rummy enthusiasts. 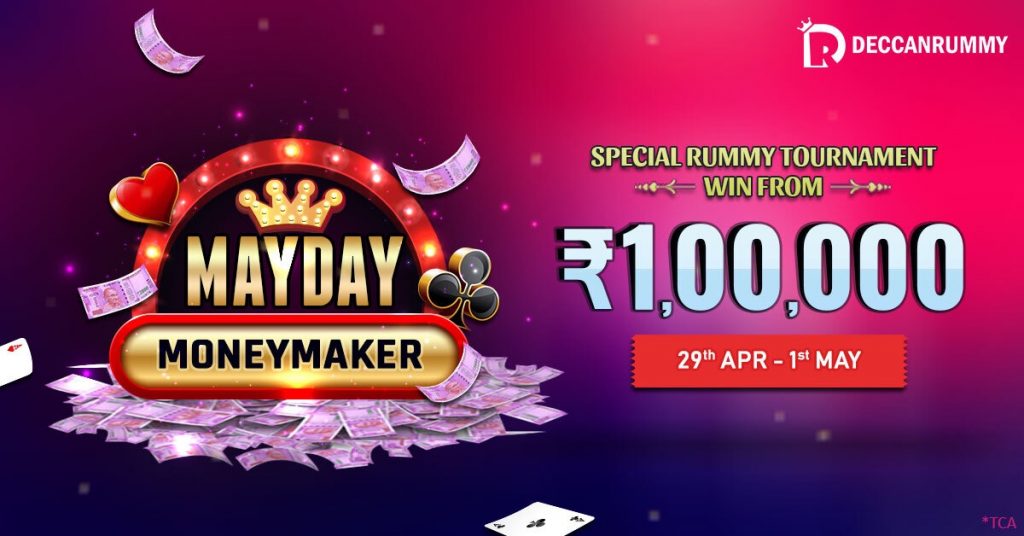 May 1 is celebrated as International labour day. It is an official public holiday in all the major countries in the globe. The actual reason for the special day is to celebrate the contribution made by every single labour and working-class people to society. This day is also practised in India.

The first celebration of May Day was held at Chennai on May 1, 1923. Though every country has their own origin for this day, the main theme stays the same.

The tourney starts on April 29 and ends on May 1. Starting with the Satellite tourney on April 29, the first level of tourney has 402 seats to contest and carries a prize pool worth 20k, and there are 46 free tickets to play the next level of contest. Players have to make a buy-in of ₹50.

Followed by the Qualifier on April 30 that has 299 seats and carries a prize pool worth 30k. Join the qualifiers stage by using the ticket received in the satellite level, or else players can also join the table by making a buy-in of ₹100. End of the day, 100 players get free tickets to play the grand finale.

The grand finale on May 1! 250 seats with 50k prize pool. You can directly join the finale, by making a buy-in of ₹200. Players can also join the table using the ticket won in the previous stage.