Deccan Rummy is constantly looking at ways to cater to the rummy players all across India. Festivals are always made double enjoyable here at Deccan Rummy with our Special Tournaments. We have an excellent track record of hosting grand events during Indian festivals which draws the best players from the Indian rummy circuit. Being aware of the buzz around the Indian festivals, Deccan Rummy has always upped the guarantees for the special tournaments.

In keeping up with our custom of hosting big rummy tournaments during the festival, we announced a Special Tournament for Holi with a prize pool of Rs. 50000 GTD. What better way for a rummy player to celebrate the festival of colors than winning a majestic tournament? Holi and Rummy have a lot in common. The joy and vibrancy of both are unmatched. Right from the day, we announced the tournament, a lot of rummy enthusiasts started collecting their free tickets. 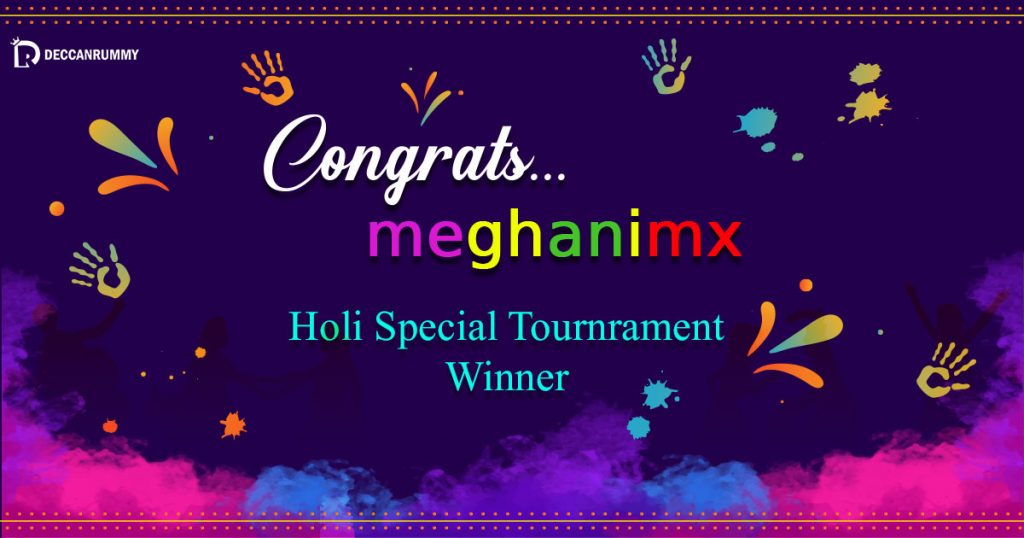 Last Night saw the Holi Special Tournament 50K GTD played out at Deccan Rummy. The action started at 9 PM. The event drew a digital footfall of 678 players which was close to being a full house, with each aiming to win the big prize. Just like all the special tournaments, the action was power packed and solid. The battlefield was fierce with rummy players at all experience levels joining the hunt to win big prizes. Players with a proven track record were gunning ahead of the others in each round. Just when we thought one of them is going to win the rummy tournament, out of the blue, a new player “meghanimx” pulled out all tricks in her bag and managed to clinch the top prize.

It is quite an achievement that a newbie was able to overcome formidable opponents and ship the first place. This goes to show that even newbies have a fair chance to cause major upsets in this beautiful game. As we mentioned in this article, online games are no longer only a man’s territory. Women are making rapid inroads into this field by leaving an indelible impression. Deccan Rummy extends our heartfelt congratulations to Meghanamix for this stellar achievement. We feel we are going to see more of her in the near future.

For her fantastic efforts, “Meghanimx” takes home a prize of Rs. 2572. Despite putting up a brave fight, cutesugar wasn’t able to overpower Meghanimx and had to settle for the runner-up spot. For his hard-fought efforts, cutesugar took home a prize amount of Rs. 2009. And the third spot was sealed by Kanthavel, who took home Rs. 1569. We would like to congratulate both of them for their brave efforts. A win for both of them is on the nearby. We hope to see them take down special tournaments in the near future.

Deccan Rummy management conveys our Special thanks to all the players who participated in this tournament making it as a grand success. We understand not everyone gets lucky with these tournaments. Don’t lose heart if you couldn’t make the cut, there’s always a tomorrow. Also, as the excitement around IPL is building up, so is the excitement around our Rummy Premier League which is all set to begin from Mar 23.  And also there’s this IPL bonanza which is yet another predict and win offering from us.

Deccan Rummy considers tournaments as our lifeline and we are always willing to walk that extra mile in giving what the users desire the most. So, get ready for a bevy of offers which are going to be a benchmark in the Indian online rummy industry.

Want to win big in rummy but don’t have an account yet? Register now and start playing with a sign-up bonus of Rs. 25.