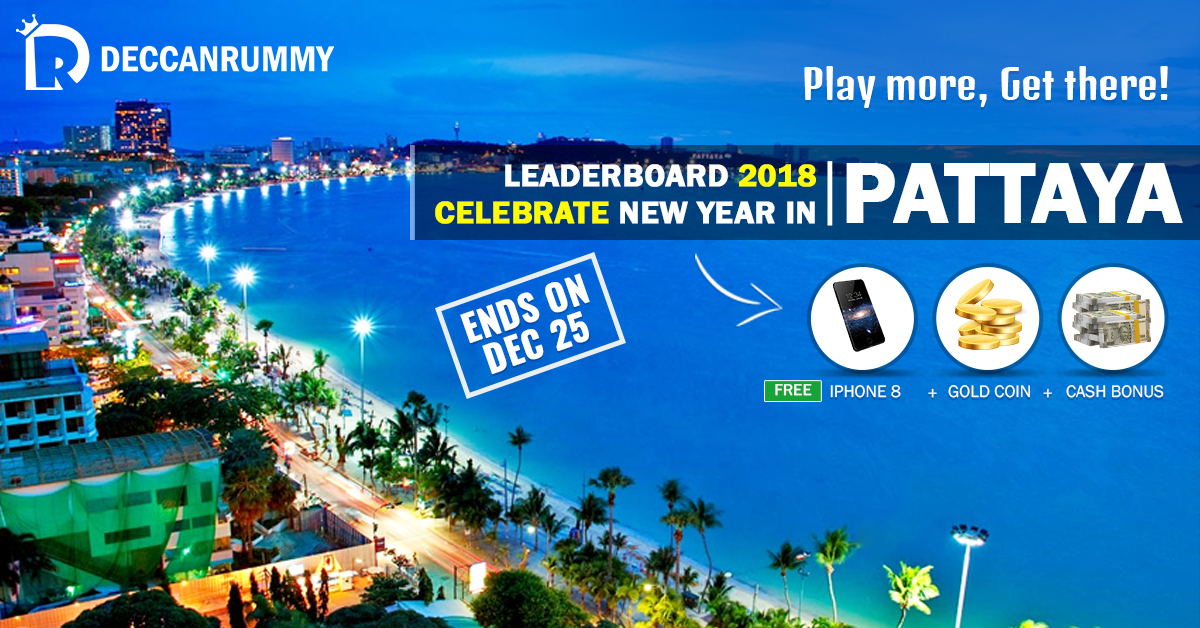 India’s Fastest online Rummy site, DeccanRummy.com recently launched a New year Leaderboard contest from Nov 1 – Dec 25, 2017 where players competed against each other to feature in the New Year leaderboard. As expected the contest was very fierce right from the word go and the players kept on increasing their leaderboard points. The stakes were high this time as many exciting prizes were up for grabs.

Prizes such as all-expense paid Pattaya Trip, iPhones, Gold coins, Gift Vouchers and Cash Bonus pushed players to perform to their best. The highlight among prizes, however, was the VIP Party in Pattaya. Partying in Pattaya during New Year’s Eve is every tourist’s desire. The theme of the party was “Never Say Never Again” which goes well with the vibrancy of Pattaya. This probably aroused the audience and they came down in droves to participate in this event.

At the end of the contest, 15 successful players held their nerves to come out on top. The top 3 leaderboard winners received brand new iPhones besides the New Year trip to Pattaya. Deccan Rummy has always gone beyond the call of duty when it comes to rewarding their players and this time it was no exception. The players who traveled to Pattaya received a fabulous treat of their lifetime and spent New Year the way they always wanted. Here’s a short recap of the extraordinary fun that the players had at Pattaya.

Elaborate travel arrangements were already made for the players to travel from their destinations to Bangkok. As soon as the players landed, they were received by the well-prepared Deccan Rummy team who took them to the luxurious villa booked for them. From the moment they landed, it was Fun! From receiving energizing Thai Massage in the morning to visiting the crazy Russian girls club on Walking Street, it proved to be a fitting start to the amazing fun they were about to receive.

The next day being New Year’s Eve, players were thoroughly gearing up for the New Year Pool Party as it was always showcased as a highlight of the promotion. The players started the day off with a visit to the shooting range with some of them shooting a few rounds to really blow off some steam. It was followed by go-karting at one of the best Go-Kart tracks in the world. After a sumptuous lunch, players relaxed for some time. As the day winded down, players started to gear up for much expected New Year Party at 808 Club in Walking street, aka the gateway to heaven on earth. And the party was special in every way it was expected. Accompanied by beautiful women, the guests had an awesome time partying in a setting that’s an envy of every tourist.

Coming back to the trip, the next day started understandably late as the guests were so jaded by the all-consuming party. But there was not even an iota short in entertainment. The day started off on a powerful note with Bungee Jumping which was a delight for the adrenaline junkies among the guests. And then immediately it was followed by Human Slingshot, which was a new experience for all the guests. Players who craved for more adrenaline went for Pattaya Rocket Ball Ride which was a breathtaking experience. The adventure involves players turning upside down every way in the air. A few tired players decided to remain in their villas and opted for a trad thai message while the rest of them preferred to go shopping. The day came to a close with guests chilling off in a Thai disco with the guys partying so hard. We were so amazed by the energy levels of the players. On the final day, the guests were escorted by a luxury van to Bangkok and they departed from there to their respective destinations. All said and done, this trip was truly spectacular in every way that it was planned.

Message from Head of operations

Thamaraikannan, head of Operations, DeccanRummy.co said “Calling this promotion merely a successful one would be an understatement. We were completely blown by the commitment shown by the player to reach the top. That gave us an added responsibility not to disappoint players anyway during the trip we promised. Thanks to our support staffs everything went as planned and we were able to provide the players with everything that we promised. We hope our players would continue to support in our future endeavors”.

He further added “We have a lot of offers and promotions planned for the year 2018. As a fitting start, we have started the weekly leaderboard contest that is being received warmly by our players. The excitement is already sky high as the prizes keep increasing with every promotion of ours. All I can say is keep playing, you don’t have to scramble for goodies, they will come to the place where you are”.

The most wonderful aspect about the whole trip other than the players’ energy was that the guests were treated with some of the finest cuisines they could ever get in the world, with the dishes prepared by the world-renowned chef Daniel Isberg. Players got a perfect culinary experience with an electric mix of dishes every day.

To satiate such a diverse group of players in one shot is no mean feat and Daniel Isberg proved once again why he remains as the top Chef in Thailand. Be it Spanish, Mexican, English or Traditional Thai Food, Isberg made sure our guests were in for a treat every time. After all getting to gorge on best dishes from all around the world at one time is not an opportunity that people will get every day. We really appreciate Daniel Isberg’s phenomenal work and thank the users for being such a sport. His long and multi-faceted culinary experience was fairly evident when everyone appreciated his stunning culinary skills. We look forward to associating with him as often as possible.

Rummy enthusiasts can visit the website to know more about the latest rummy promotions at DeccanRummy.
Deccan Rummy is the most effective site that you could ever resort to if you are thinking about playing rummy online. Playing rummy card game is something that involves executing a lot of meticulous strategies no matter whether you are an amateur and professional one. Why risk playing in unknown sites when you can find the right rummy online site that gives everything you want?