India’s leading online gaming portal, Deccan Rummy is known for its high-quality offerings and seamless gaming experience. It offers an array of rummy games and tournament where the players can play and win mammoth prizes. Offering avid rummy buffs an unrivaled user experience along with the chance to make huge fortunes through a host of tournaments and other contests, Deccan Rummy has grown on to become one of the most reputed names in the Indian rummy sector.

Millions of gamers are using our platform everyday to satiate their gaming cravings. Thousands of gamers have already emerged winners in our tournaments. Winning is a special feeling for anyone and we offer you a competitive platform to experience that.

Recently, we have been enthralling our rummy players all over the country with a series of satellite tournaments every month. The Coronavirus Lockdown has brought about a massive increase in the number of players hitting our felts. Indian Rummy being one of the easiest games to master, a lot of newbies are incredibly performing well. Our Satellite tournaments have seen equal number of participation from newcomers and pro players alike. 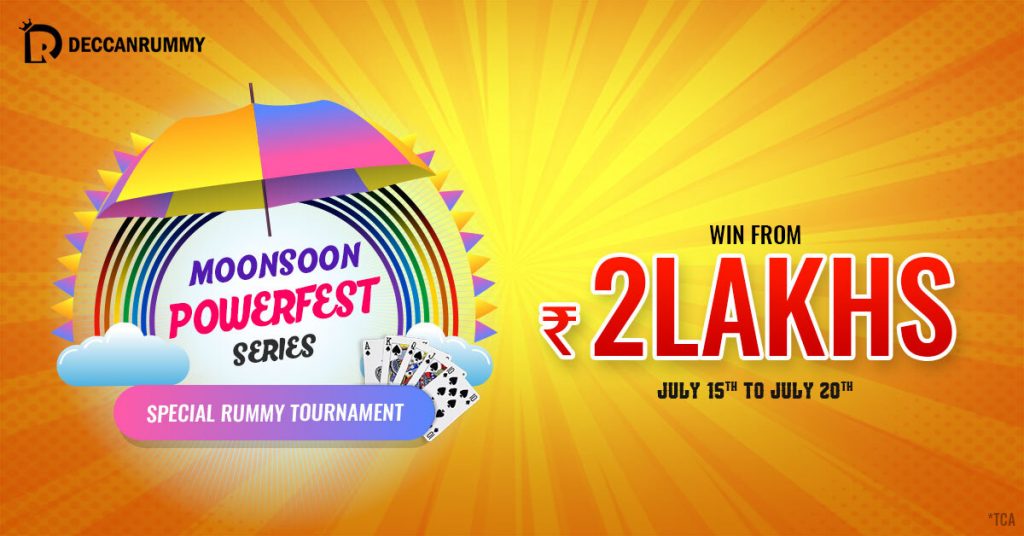 The hangover from the Summer Satellite Series conducted a month back has hardly settled, leaving in its wake a craving for more tournament action. Deccan Rummy has just made this monsoon season merrier with our announcement of Monsoon Powerfest rummy tournament online.

Coming with a prizepool of 2 lakhs, the tournament will be conducted from July 15-20. 6 days of tournament action comprising 3 satellites, 2 qualifiers and a grand standalone finale with a whopping prizepool of 1 Lakh.

The uniqueness of the tournament lies in its remarkable reward that the players can receive during every stage of the tournament. Apart from the prize money, players will receive tickets to the next stage in Satellites and Qualifiers respectively .

We got in touch with some of the prior tournament winners and how excited they are to take part in DeccanRummy’s yet another flagship event. Multiple tourney winner Shrikanth Reddy says ” With nothing much in the entertainment sector outside due to Coronavirus Pandemic, rummy is proving a wholesome entertainment. I have been playing in the site for a long time and won a few tournaments. It’s always exciting to take part in a tournament at Deccan Rummy as the action is A+. I’m keenly looking forward to (and hopefully ship) Monsoon Powerfest tourney this time. Wishing Good luck to all the competitors”. Just like Shrikanth, there are many other players craving to be a part of this exciting tournament action.

July is going to be a very busy month for rummy enthusiasts. With Monsoon setting in, it’s going to be downpour for sure. Similarly, a downpour of exciting rewards and promotions are awaiting you this July.

So do you think you have it in you to battle against some of the best rummy players in the coutnry? If yes, download rummy app and register for the tourney and prove your mettle.