Hey rummy enthusiasts, Rummy Raani’s trip to Guntur was very special in every way imagined. A lot of people warmed up to her and were taken down a nostalgic trip down the lane with the destinations that she visited. Perhaps the most significant highlight of the whole promotion was that the players actively took part in all the promotions and availed them to the fullest. Be it the Glorious Guntur Bonus offer or the free 100 for 100 offer, the players were on the elements and took advantage of each offer to its fullest. We saw a lot of players walking out in flying colours with this promotion. Even before the scheduled closure of this promotion, a lot of people curiously enquired about Rummy Raani’s next destination stop. We could see the kind of impact that Rummy Raani has created with such enthusiasm from all quarters.

To make things interesting, there was a contest where a teaser about Rummy Raani’s next visit was updated in Facebook and players were asked to guess the answer. Players who came up with the correct answer were given free tickets to Social Shark tournament. Finally, the wait is now over, it’s time we officially let the world know about Rummy Raani’s next destination stop. Yes, folks, Rummy Raani would be traveling to the gateway of the south (a) Chennai. Called as the Detroit of India, the place is vibrant and buzzing with activities throughout the day. It is also called as the cultural capital of India, given the rich culture and heritage the city represents. Kudos to the players who picked the clue that we had given earlier in our contest and came up with the right answer. You guys continue to impress!

Want to know the promotions on offer. We do not make rich claims but rather walk the talk with whatever that we promise. We’ve named  this promotion, Namma Ooru Madrasu. Here are the ways through which you can make some cool bonuses.

The first promotion starts with a bang and that carries what exactly Chennai is famous for. Yes, the traditional Filter Kaapi for which every chennaite would even die for. It’s one of the unmissable parts of the daily routine of every Chennaite, to down XYZ number of cups of Filter Coffee/day. Here is the promotion in detail

Players who successfully complete the above steps can win an instant cash bonus of Rs. 50.0. Avail this awesome bonus amount and play cash rummy game online.

With a length of 13 km, including a 6 km promenade, the Marina is considered the world’s second longest urban beach. Just like Marina Beach which is in the history books, you have an opportunity to register yourself in the history books of Deccan Rummy by winning this contest. Play rummy online and finish the game with the longest 5 Card pure sequence and win a rewarding bonus that amounts to 10% of your table winnings. Offer valid till Aug 29.

Central Station is one of the important landmarks of Chennai that regularly features in movies and many other media publications. The central station connects the south to the 3 corners of India. To mark this quadrilateral connection, we have an exceptional contest on the cards. Win rummy games with a monumental 4 set of number 4 card and win huge bonus cash – 10% of Table winnings as a cash bonus 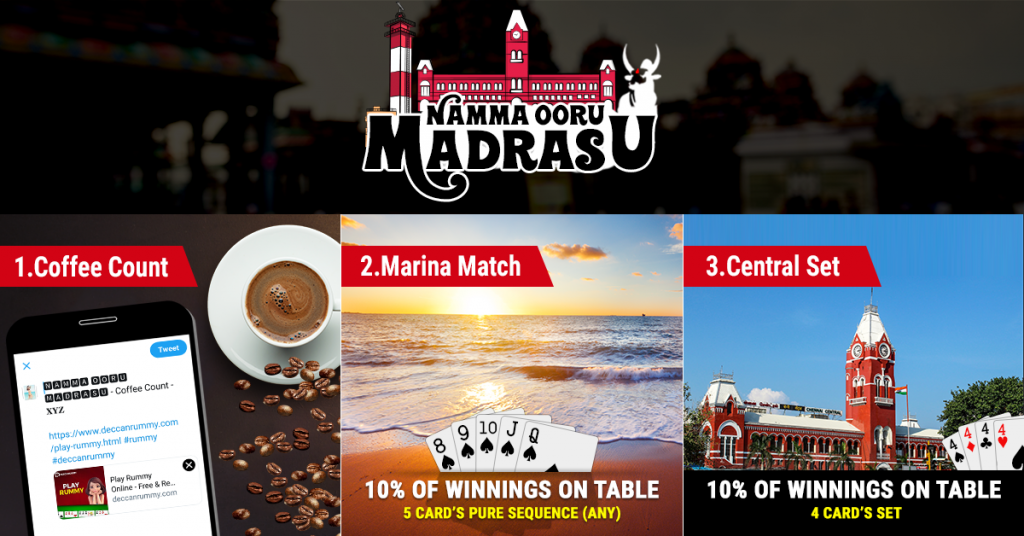 Curious to know about the places she’s going to visit

So stay connected to Rummy Raani by subscribing to her YouTube channel. https://www.youtube.com/channel/UCMOqqjbfP8chcOO_u6-SGiA