Last Saturday saw the curtains pulled over for the much-revered New Year Millionaire Leaderboard 2.0 contest. It’s been supremely busy days at the Deccan Rummy tables, ever since the promotion got underway in the site. Non-Stop Madness is how we could sum up these exciting two months in the Indian rummy circuit.

Deccan Rummy is known for grandly hosting events of such magnitude, and this is one of the grandest offerings from them. As the company decided, every genuine participant should have a slice of the cake; they opened the contest in 3 levels – Diamond, Platinum, and Gold. Imagine winning a dream car just by playing rummy. Yes! It was made possible with this promotion. The New Year Millionaire Leaderboard 2.0 was incepted back in 2018 and witnessed a tremendous turnout from the rummy community in India. The event has set a benchmark for New Year promotions, and the same promotion has now returned on a much bigger scale and magnitude.

The contest was action-packed right from the word go. A lot of players turned to the cash tables to garner points and be a part of this grand spectacle. Rummy Players from all walks of life entered the event, and they bulldozed their way into the table, giving the veterans a run for their money. From casual gamers and freeroll-turned-cash players to high-stakes grinders, the field almost resembled a battlefield with players gunning for each others’ position. The game was upped infinitely, and the track was blazing with raw action!

An event of this caliber requires monumental patience and experience that, generally, only veterans can pull off. But this event shattered that myth as lots of newbies, and even freeroll gamers made their presence felt with impressive performance. 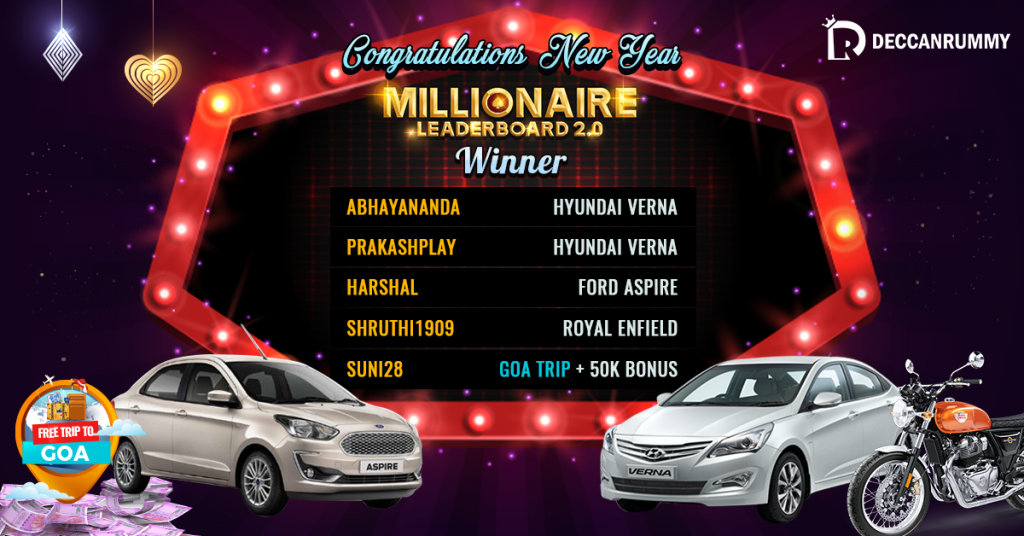 Considering the consistency and performance of players and the unrelenting battlefield, topping such an event is no ordinary feat. And taking down the Diamond leaderboard race was Nalinesh Sandar (Username: Abhyananada) and Prakash Play, both of whom secured the top 3 position for five weeks to win a brand new Hyundai Verna.

Although Prakashplay has already won a few weekly leaderboard events, his New Year leaderboard win last night fetched his biggest score on Deccan Rummy. And while many may find this a big success, Prakashplay feels he has a long way to go and has bigger dreams.

Their unrelenting efforts, along with their dogged persistence, are what that made them excel and grab these life-changing prizes.

Only in a leaderboard race of this magnitude, we get to see two players jointly winning a prize. It’s a reward for consistency. Staying on your top form over seven weeks is no ordinary achievement. Both Prakashplay and Abhyananda made the whole rummy world look at them in collective awe over their inspired performance.

In the Platinum section, it was Shankit Rajit (username: Harshal) who topped the category by placing himself in the top 2 positions in 5 weeks to win a stunning Ford Aspire. Winning a car is still a dream for many players, Harshal being a seasoned rummy veteran found the going easy. With a reliable performance in this contest, this win is yet another addition in the stellar resume of Harshal.

Shruthi Thakur, who goes by the monicker shruthi1909, won a dashing RE Interceptor 650CC, for placing himself within the top 3 positions in the Millionaire leaderboard Platinum level for over five weeks.

Deccan Rummy has vowed to make this month as December to Remember. It appears as a certainty as other winners of the leaderboard have been provided an opportunity to travel to Goa along in an all-expense-paid trip.

Time and again, Deccan Rummy proves to be the best in business with its plethora of promotions, offers, bonuses, and innovative contests. This New Year leaderboard 2.0, with its vast range of giveaways, proved that once more. Registering a massive field and running successfully, Deccan Rummy has set a bar with this promotion.

Thamaraikannan, Head of Operations, Deccan Games, remarked, “Congrats to all the winners. The turnout for this event was unprecedented, and we would like to thank each and every one of you who participated in this event. We are incredibly proud of these milestones and will continue to provide our customers, a vast and expansive set of promotions.”

Ready to score some wins like these players? Sign up for Deccan Rummy for free and get to win huge!