Our weekly leaderboard race has been going from strength to strength since the day it was launched. The race with its competitive design, is drawing lots of players into it every week. Who wouldn’t want to grab the awesome prizes such as iPhones & OnePlus that are waiting to be won every week. If you’re looking for edgy contest which stretches you to your limits, then this leaderboard contest is just for you. The weekly leaderboard contest in addition to pitting you against the best players of the rummy game, also rewards you for your heroic efforts with stunning gadgets.

Ever since iPhone 8 went up for grabs, we see a spirited fight amongst our players to grab them on. Every week more and more new players are joining the hunt for it. The contest is intense and we are proud of hosting such a contest where players are fighting tooth and nail. 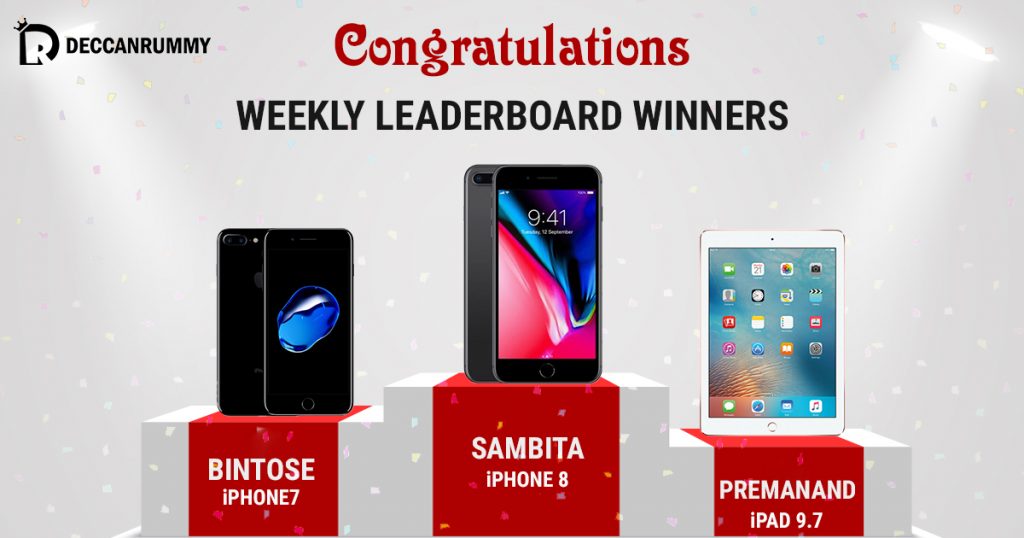 After one such fierce battle, it was Sambita who topped the Diamond leaderboard race last week and won the gorgeous iPhone 8. Last week’s race was a tough one with players gunning for each other’s throat to grab the ultimate prize. We like players who prevail in this cut-throat atmosphere. Congratulations to Sambita for his majestic gameplay last week. It’s a fitting reward after such a splendid effort. Deccan Rummy also wishes Bintose and Premanand for winning iPhone 7 & iPad 9.7 respectively. We understand they too tried pretty hard but a contest like this can have only one winner.

This week too these awesome gifts are up for grabs. All the players need to do is to keep increasing the loyalty points to come at the top of this diamond leaderboard. And for that players need to play cash games on tables valued more than Rs. 2000.

See you soon at the top of the leaderboard!