The keyword here is skill games. According to the Supreme court of India, playing skill games for stakes does not constitute gambling. A game of skill is when a player invests his time refining his skills to perform in a particular game. By this logic, games where “success depends principally upon the superior knowledge, training, attention, experience, and adroitness of the player fall under skill games category.

Card games like Poker and rummy easily fit into this category. Contrary to the popular belief that these are games based on chances, these are games where skills outweigh the element of chances. Which is the reason why so many players keep earning money online playing these two games. 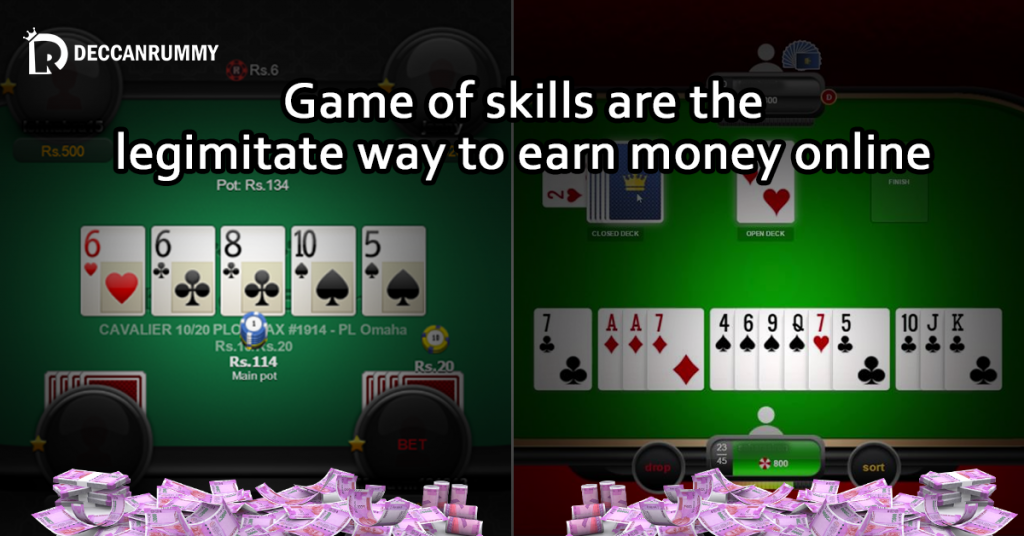 Indian rummy is a 13 card game that has a rich history in India being played for several generations. Since the game has a long history in the subcontinent, being an essential part of festivals and family gatherings, it’s popularity all these years is unrivaled. The objective in the game is to arrange all the 13 cards into proper sequences and/or sets. In order to meet the objective, the player has to use his mathematical and analytical skills. Additionally, mental skills such as concentration, observation, and patience play a significant role in the outcome of the come.

It takes years for a player to gain expertise in a rummy card game. Since the advent of online rummy, the popularity of the game has skyrocketed. What used to be a game that was largely constrained within the family circles can now be enjoyed anytime, with anyone across the nation. To keep the players not bored, online rummy portals give an option to the users to play multiple rummy variants and rummy tournaments. In the event the player is new to the Indian rummy platform, he can gain mastery in the game by practicing in the free practice tables. Sites like Deccan Rummy offer 10000 free chips to every player signing up on the platform.

Similarly, poker is a card game that has been gaining traction in India of-late. Though it’s a western import, a lot of players have taken a liking to it, because of the intriguing game play and huge prize money on the cards. Just like Indian rummy, poker is a skill game. Poker has multiple variations such as Texas Hold ‘em, Pot Limit Omaha which offer variety to the players.

The simplicity of both games is the main reason as to why the game remains popular among all the cash games online. As you are pitted against players at all levels, you get a challenging platform to prove your expertise in the game. By playing these skill-based card games on online platforms, you will always get the chance to take your game to the next level and a chance to win a massive amount of cash. Both the games are legal to play and all it requires is some skill and dedication to succeed in both these games.

Real money games are an attraction to everyone. Both Poker and rummy are skill games online that are seeing a blooming response from players across India. As more and more players are joining these platforms, sites hosting these card games are luring the players with massive prize amounts. Anyone with an inclination towards skill games can succeed in this environment.