In the Indian rummy industry, Deccan Rummy is known to host some of the best online rummy tournaments. Known for its high value returns, our tournaments see huge participation from all quarters of India. In addition to the regular freeroll and cash rummy games, we host special rummy tournaments for all Indian festivals which act like crown in the jewel. This special tournament is hosted every once in and it attracts some of the best pros around the rummy circuit. Last night, another edition of our special tournament was contested in our platform – The Christmas Special Rummy Tournament. 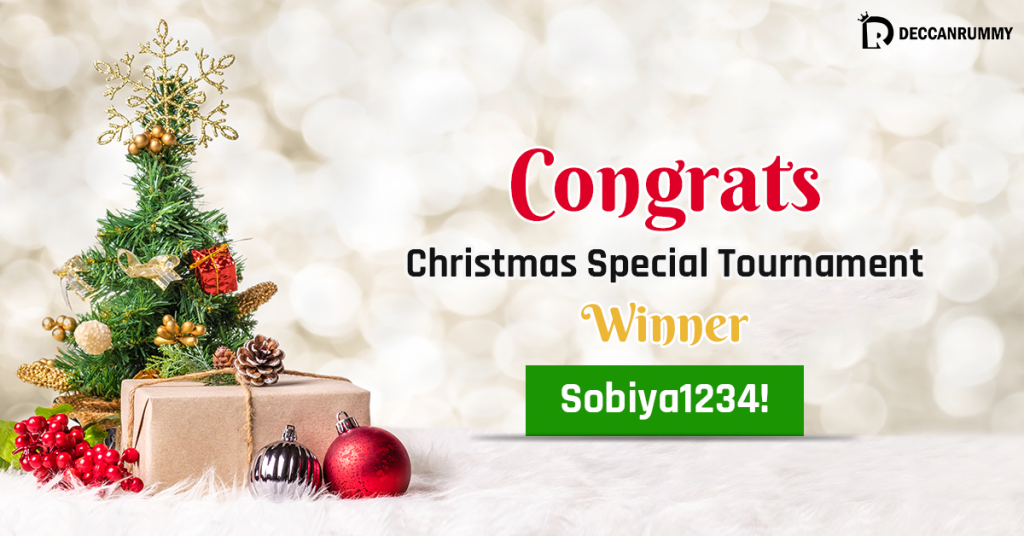 Players waited for this rummy tournament for weeks and it finally kicked off last night at 9:30 PM. Every rummy aspirant want to be a part of this tournament that came with a prizepool of Rs. 50000 with free tickets by depositing Rs. 1000 or with a small buy-in of Rs 200. When you can turn such a small investment to win big prizes, why wouldn’t you want to be a part of it? These kinds of special rummy tournaments are a perfect way for an emerging rummy player to rise and shine in the intensely competitive rummy industry. And for the experts, this is the perfect way to solidify their position. With such heavy stakes involved, no rummy enthusiasts would want to miss such an opportunity.

The 50K GTD Christmas Special Rummy Tournament drew a strong field of 331 players. Just like all our special tournaments, the tournament proved to be a tough challenge with players at all experience level battling it out for the coveted prizepool. In the end, 150 players were paid out but it was sobiya1234 who prevailed with his skill, to crush all the opponents and walked away with the top prize. Sobiya12234 battled some fierce competition, including a tough final table that included some of the long time veterans of Deccan Rummy. It was a great victory and sobiya1234 was feeling extremely proud about the victory. We at Deccan Rummy wholeheartedly congratulate sobiya1234 for his stupendous efforts. Winning a tournament like this is a valuable addition to his rummy career. We wish to see him win many such rummy tournaments in the future.

As for those who couldn’t make the cut this time, we would like to state that there are many more tournaments in the pipeline in 2019, keep fighting hard; you may end up winning one very soon!

Want to win big like sobiya1234 but don’t have account as yet? Sign-up HERE and begin your rummy journey with a Rs. 5000 welcome bonus. See you soon at our tables!