Deccan Rummy is the only site which is continuously offering bona fide promotions and tournaments for the all the rummy enthusiasts in India. After the hugely successful Phuket gala, here comes another one – Baahubali 2 Special tourney coinciding the release of India’s largest magnum opus “Baahubali 2 – The Conclusion”.

We can understand that movie buffs can’t wait for the release of Baahubali 2 given the massive success of the first part. No other film generated such a buzz for a decade’s time as much as Baahubali 2 has generated now. Just like you, we too are finding it hard to hold our excitement and are eager to find why Katappa killed Baahubali? The film will hit theaters this Friday in more than 7000 screens across India. Releasing in four Indian languages – Telugu, Tamil, Hindi, and Kannada – the magnum opus is expected to shatter all box office records. In- fact, Bahubali has become one of the biggest franchises with the film being the main part ably supplemented by merchandises, comics, games & toys. Rumors are emerging that this sequel would be more intense than its prequel. The franchise is being fervently promoted by its makers across all media platforms. So, it’s not surprising to see leading brands coming up with new offers associated with the movie to cash-in on the craze. 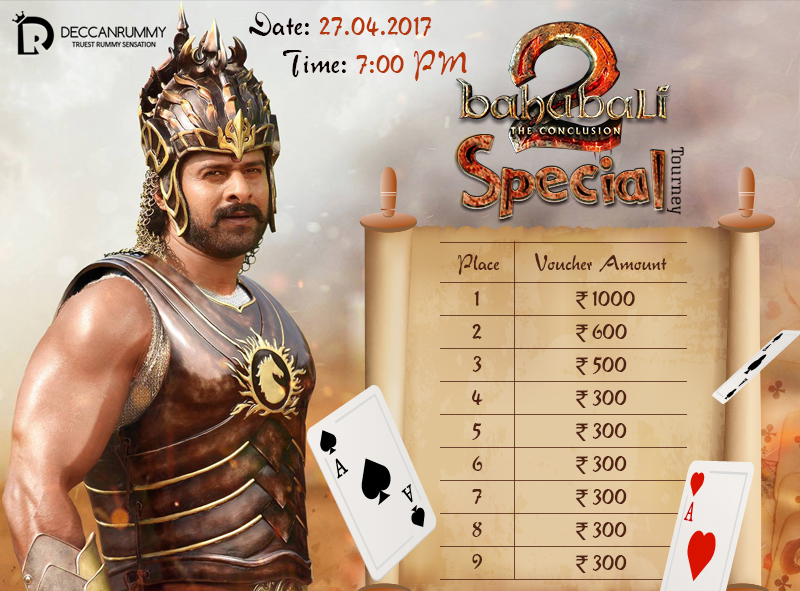 When it comes to offering reliable rummy promotions to players in India, Deccan Rummy is miles ahead of our competitors. As Bahubali fever is gripping the nation, movie buffs are dying to get the tickets to watch the film on the first day. To make this job easier, we are conducting this Baahubali 2 special tourney where the winners are going to be given Movie vouchers as prizes. Players can use the movie vouchers to book the tickets online in one of the leading entertainment ticketing portals. A contest like this is especially relevant at this time when the fever surrounding the movie is high

Count on this tournament to be fierce one just like any other tournaments hosted by us. So, brush your rummy skills before you hit the tables. Aren’t you excited by the possibility of winning the contest and watching the film? As Baahubali seems to be the zeitgeist now, it’s important you get to be a part of this zeitgeist and avoid the risk of being left out.

Take part in this tournament; outmaneuver your opponents; win the vouchers; Book the tickets without any delay and hit the theaters for a gripping FDFS experience. After all, there is nothing more gratifying than to watch your favorite film on the first day. Deccan Rummy is the perfect place to play rummy games online; stride inside to play a variety of rummy.If you are an android user looking for a genuine 13 card rummy game download try our Deccan Rummy mobile for a scintillating mobile rummy experience.