The much awaited Sunday Satellite Series finale concluded yesterday at your Favorite rummy site, Deccan Rummy. As the lockdown and the blistering heat kept the people largely indoors, things were extremely frustrating for them. With uncertainty looming large, things were appearing bleak, Summer Satellite Series was a glimmer of hope. The tough time’s always going to end at some point, but we don’t have to wait for good time especially when you have rummy for your company.

Deccan Rummy always does things that put a smile on the faces of our players. When you are upset it is very important to let your body and mind rest adequately. And nothing refreshes the mind like a game of rummy card game at Deccan Rummy. The whole idea behind this Summer Satellite series is to reinforce a sense of positivity in the minds of people and also giving them an opportunity to make some extra money during this Coronavirus lockdown. 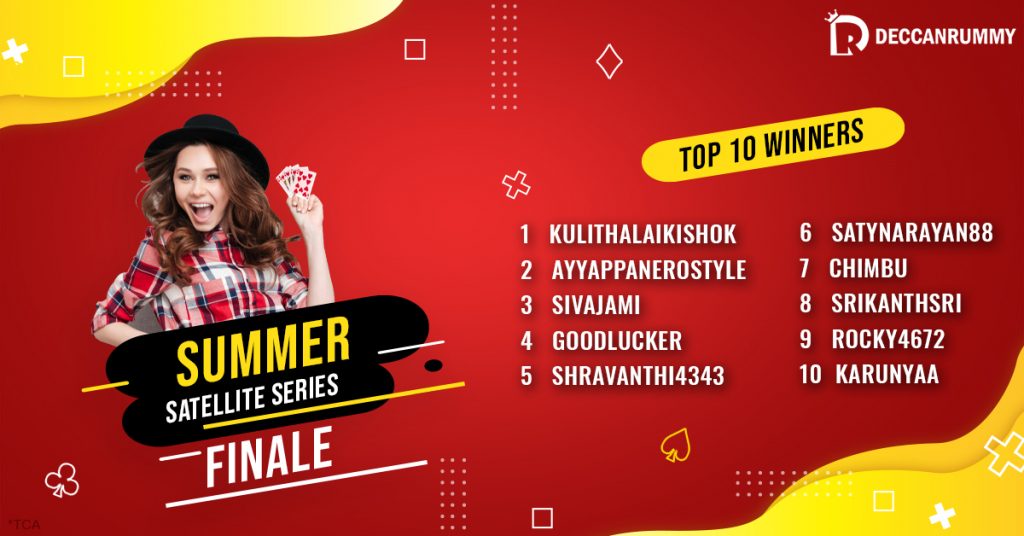 Special Tourneys with big prizepool have always been the hallmark of our rummy site. Summer Satellite series gathered a monumental prize pool of 1 Lakh across 6 tourneys. We have been actively promoting this Summer Satellite Series tourney through multiple channels – SMS, Social Media, and Pop-ups. The response to this tourney has been amazing just like all our special tourneys. Summer Satellite series comprises 3 satellites, 2 qualifiers and one grand finale. With a prize pool of 1 Lakh, the tournament was a great opportunity to win some extra cash.

The Satellites and Qualifiers saw full house participation. People were valiantly fighting to progress to the next round with the free ticket. Nothing beats the joy of organically progressing to the Finale with a limited buy-in in the satellites. It gives the opportunity to clash with some of the brilliant rummy minds in the country. Satellites and Qualifiers were as thrilling as any other special tournament at Deccan Rummy.

The curtains finally closed on Summer Satellite series and boy-o-boy, what a show it was. Nobody’s going to miss a big payday and the tournament brimmed with people at all experience levels. Obviously, such a tournament sees fierce rivalry with brilliant rummy minds across the country bringing their years of experience and skills to our tables. After several hours of intense battle, it was “kulithalaikishok” who walked way with the top prize.

kulithalaikishok bested a strong field infested with several title winners and champs. Winning a tournament of this magnitude is a special feat. An unknown to most of the Indian rummy community, kulithalaikishok put up a formidable display of skills, adroitness, and toughness to win his first title in this site. By winning this title, kulithalaikishok finds himself in the group of elite rummy winners.

Deccan Rummy extends our heartfelt congratulations to “ayyappanerostyle” and “sivajami” who secured the second and third place respectively. With their stellar effort to reach their position, their time to win a big tournament of this stature is not far off.

A huge shout out to the entire Indian Rummy community for making such an event possible. Congratulations to all the players who took part in this eventful tournament and fought bravely despite not be able to win it. It just proves our contention that Indian Rummy game is a game of skill. Keep trying as we are going to put up so many such rummy tournaments in the near future.

Big congrats to everyone once again! See you next time soon!