The prestigious Diwali Rummy Dhamaka Leaderboard has just concluded this Saturday. After a month of intense rummy action spanning over four weeks, the much-hyped leaderboard contest went off the floors. While players at Deccan Rummy are no strangers to rummy Leaderboard races, this one was special as it was centered around the Diwali festival. 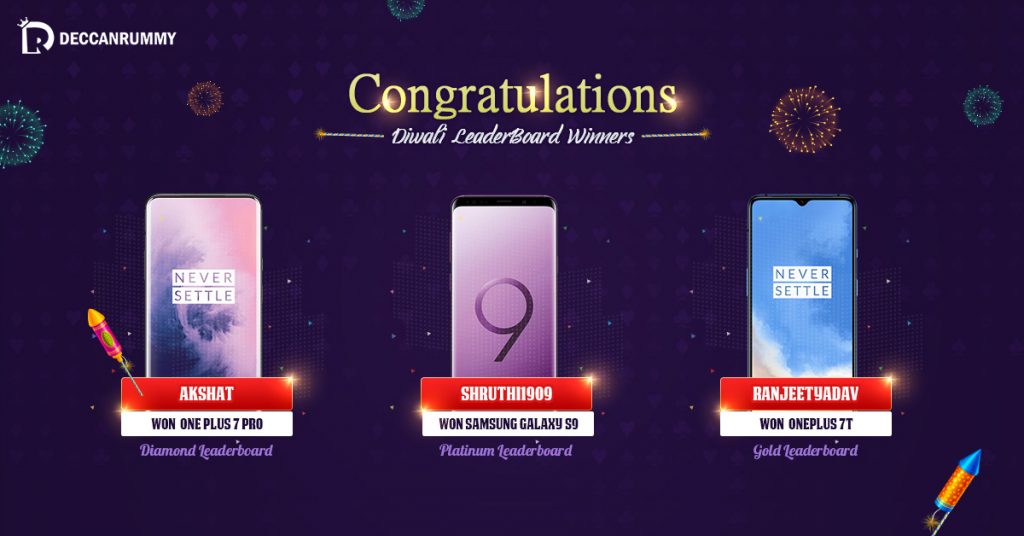 As Leaderboard contests are the real test of players’ endurance, only the strongest players in the field survive. Any leaderboard contest requires players to be on top of their game over a period of time. The thrill of overtaking other players is more than winning gifts or perks. Ask any rummy expert, what is the one thing they want to accomplish in their career? Most of them would prefer rummy leaderboards than rummy tournaments or games. Leaderboards are fun; they are thrill; they are the ultimate test for a rummy player.

Buoyed by the success of earlier leaderboard races, we announced a special leaderboard race for Diwali. The month-long Diwali Rummy Dhamaka Leaderboard is all about the performance of players in the weekly leaderboard races, thus rewarding them more for their consistency. Many winners emerged in this leaderboard race, winning a host of prizes. A smashing prize list that included some of the hottest selling smartphones set the tone for the event. Winning a leaderboard race is not just money or perks; it’s fame and a chance to feature in the rummy history. The players feel the aura of magic from day 1 to the last day of the promotion.

Lots of players actively participated in the race. The gifts on offer were a huge motivation for the players to shift gears. The action was sparkling and tight all the time. Vijayalanil Rajesmini (User name: Akshat) ranked himself in the top 4 for three weeks in the Diamond leaderboard. For his brilliant effort, Akshat wins a brand new OnePlus 7 Pro.

In the Platinum Division, the action was equally intense, with players pouring their heart and soul into the game to feature in the elite list. Shruthi Thakur (User name: shruthi1909) placed herself in the top 2 positions for three weeks, thereby winning a Samsung Galaxy S9. Sandaman Sharanil (Username: Ranjeetyadav) ranked in the top 3 for three weeks, winning himself OnePlus 7T. Remember, these are gifts apart from their regular gifts given away for the weekly leaderboard race.

Deccan Rummy would like to congratulate all the winners for their stupendous effort to feature in the leaderboard. The promotion adds as yet another star in our successful badge of promotions. We would also like to thank all the players who tried but couldn’t succeed. All we can say is keep trying; your glory days are sooner than what you imagine.

It’s a good time to be a rummy player as there are plenty of promotions online at Deccan Rummy. Download Rummy app, sign up, and get started!