Shahid Kapoor’s much-awaited movie Kabir Singh which is been in the making for some time is finally releasing tomorrow. Kabir Singh is an official remake of Arjun Reddy, which is a path-breaking film in the Telugu film industry. Directed and written by Sandeep Vanga, who also directed the original, the film stars Shahid Kapoor and Kiara Advani.

The theme and the star cast for the film have been generating a lot of buzz in social media. After the release of the trailer, which by the way was record-breaking for a Shahid Kapoor starrer, fans and critics feel Kabir Singh has potential to even better it’s original. 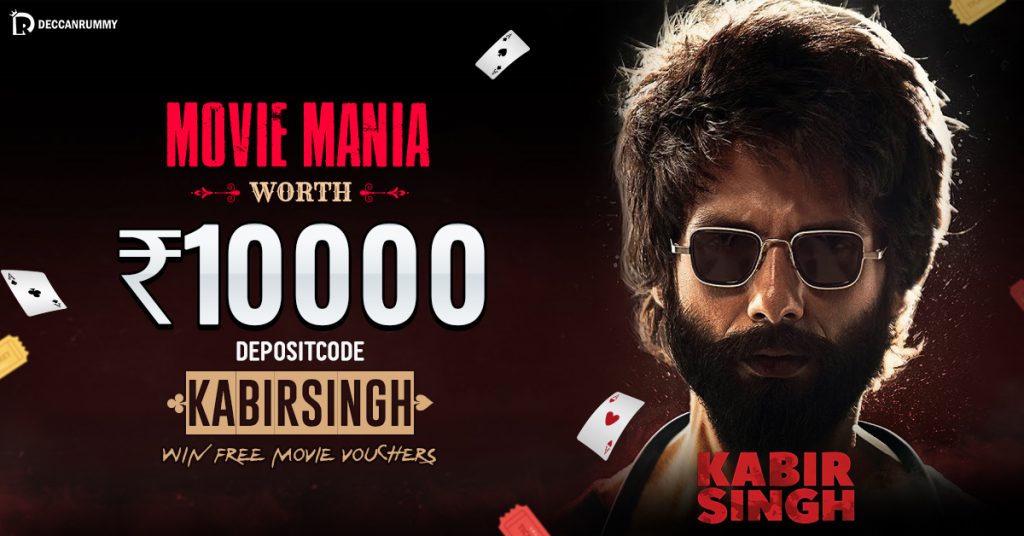 Trade analysts point out this might well be biggest ever opening for a film featuring Shahid Kapoor in a solo role. With the buzz surrounding the film at an all-time high, there has been an enormous rush to catch the film at the earliest. Here at Deccan Rummy, we value players’ interests as our own and we never hesitate to go full lengths to give what they actually want.

Deccan Rummy has garnered huge respect and popularity within the Indian rummy community mainly because of the tournaments and cash games we curate for our players. Players, pro or novice, can equally enjoy playing rummy games online in our platform. Built with the robust software and possessing a state-of-the-art gaming platform, the rummy gameplay here is engaging as well as rewarding.

Amidst the variety of rummy tournaments and offers that decorates our site, our Movie Mania tournament has a special place in the heart of the movie enthusiasts all around. Indians’ love for movies needs no introduction; our Movie Mania presents a perfect opportunity to blend their two most popular modes of entertainment – Rummy and Movies. Yes, you play rummy online here with us and you get rewarded with movie vouchers. As simple as that!

This week in our Movie Mania tournament, the winners will get movie vouchers to Kabir Singh. Those who are seeking some quality rummy action shouldn’t miss being a part of this thrilling rummy tournament.

How to participate in Movie Mania Kabir Singh Special?

2.   Players can obtain a free ticket for the tournament by making a deposit of Rs. 500 or they can play with a buy-in of Rs. 50

It is important that a rummy site has something unique to stand out in the 13 card Indian Rummy circuit that comprises of so many sites. Deccan Rummy just manages to do that with unique offerings such as these. Our Movie Mania Specials have been attracting the best rummy minds across the country who play for their love of the game and movies.

There couldn’t be a better movie than Kabir Singh, which is remade from a cult classic and promises to better that. So, if you’re keen on watching a great blend of action, romance, and drama, you should not miss Kabir Singh. And there’s no simpler way to do so than playing our Movie Mania Kabir Singh special! Get your free tickets and be there for some hot action!