Rummy has played a significant role in most of our lives. Growing up, we played the game along with our friends and families. It was the biggest pastime for us during our school and college vacations. Rummy was a regular entertainment during family gatherings and was a great tool for socializing. The game has always been a big part of our culture

Over a period of time a lot of things changed rapidly due to the incursion of technology. The game which played a huge portion of our lives is now available online entertaining us at any time we want. The transition of rummy from an offline game to online game that attracts millions of gamers across the world is truly a phenomenal milestone in the annals of technological achievements.

Was the journey easy? Certainly not! A lot of naysayers scoffed at the idea in the beginnings and did not pay much attention to the game. But with time talk about the amazing aspects of the game spread and there’s clearly been no looking back. In this post, we trace the journey of this amazing transition. 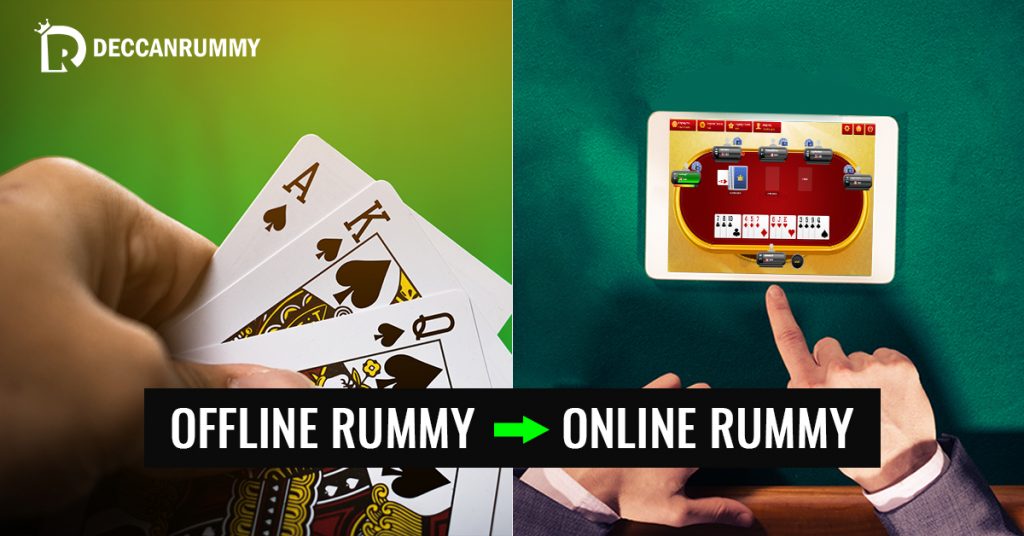 Technology has impacted every sphere of our lives even taking the traditional forms of entertainment like card games to the cyber space. The move to take card games into the danger was fraught with danger and was done more as a gamble. Taking the risk paid off in a big time as the game found new audience who weren’t big on card games earlier. Slowly, the practice of playing the game with a physical deck of cards was phased out and replaced with online card gaming.

2. Hectic Lifestyle & and its impact on culture

One of the main reasons for this transition has been the increasingly hectic lifestyle of people and drastic change in our culture. Like the fact, people’s busy lifestyle meant that they no longer have the common time to enjoy the game they loved once. With the hectic lifestyle, relative gathering has reduced drastically, and festivals have largely become family affairs. Hence, the rummy suddenly found no place that it once enjoyed. Online Rummy sites rightfully put the game back into limelight and now it’s a front-runner.

If you observes these days most players enjoy rummy card game using their mobile phones. The rapid penetration of smartphones have simplified a lot of our tasks. From banking to shopping to entertainment, you can access everything from the comfort of your living rooms. As everybody gets access to the internet through the increasing availability of smartphones and cheap data packs, it facilitated users to try out online card games such as rummy.

5. Chance to test your skills

Everyone loves challenges. Nothing gives us an adrenaline rush more than an hard fought victory. Rummy is a mind game which requires your complete focus and requires a certain amount of intelligence. Unlike other card games where luck plays a huge role, in rummy, it’s the skills that dominate the outcome. With online rummy, you get a chance to rub shoulders against players across the whole country. Everyone wants to be one step above the other. Perhaps, rummy satiates their desire for dominance with their skills, which may explain the game’s huge popularity. Additionally, playing rummy helps you to reduce your stress and increase your attention span.

The culture of playing rummy card games received a boost after it’s sojourn into the cyber space. People look at the game as a means for skill development and earning money online. With the help of growing technology, rummy online sites are coming up with numerous features to make the gaming experience more engrossing. The fact that rummy remains a front-runner despite the arrival of numerous games should indicate that it’s popularity is not going to wane anytime soon.

Rummy is one of the most popular card games in the world. Having a conquian origin, the game spread its wings to different parts of the world, changing according to the geographic location incorporated with the local culture.

In India, the game already has a cult status. We Indians always had a history of card games. Even in legends and folklore, there have been mentions about card games. Rummy despite arriving lately quickly secured a spot in our lives and has become an indispensable part of Indian culture. Remember the good old days, where we spent hours together playing a classic rummy card game with our family. As a matter of game of rummy was a common event during Indian festivals and family get-togethers. People believe playing rummy creates a strong bond and encourages camaraderie.

According to the recorded history, a card game made it to India during the time of Mughals and was popular among the royals. The game which was popular within the royals slowly made its way to the common way and the culture of playing rummy card game soon spread among the masses.

Playing cards were so popular in the yesteryear that skilled artisans began to craft their own version of cards that depicted Indian culture.

Indian players play a version of a game called Indian Rummy, which is a unique combination of Rummy 500 and Gin rummy. Now the rummy culture of India undertook a complete makeover since Digitalization. Online rummy culture reignited the passion for the game and the internet has taken rummy to an unprecedented level of popularity.

Now the fun-filled and entertaining card game is available anytime. No longer would people need to wait for other players for an offline game, as there is a barrage of online rummy sites available. As a result, there has been a remarkable increase in the number of rummy players.

The game which was popular only within clubs and family is now playable anywhere courtesy of rummy mobile apps.

Online Rummy sites like Deccan Rummy have revolutionized the Indian card gaming scene in this country. It helped keep the essence of the rummy game intact despite the advent of so many games across multiple genres. With online rummy, the reliability factor which was quite debatable in the offline version is sorted As sites like Deccan Rummy are certified for RNG (a random number generator certification to ensure card distribution is completely random), encrypted for keeping player information safe, they are more trusted by the rummy players.

Rummy sites have several deposit options for the uses. From credit cards and debit cards to Internet banking and mobile wallets, there is a slew of options for the users to make payment. With 128-bit encryption, Your payment details are secure.

As for the playing environment, sites like Deccan Rummy go a mile extra to ensure players get clean gaming experience. Deccan Rummy performs random security checks and other log-files to maintain system integrity and fairness at the tables to check for any kind of malpractice.

It’s time to become a part of this growing rummy culture in India by downloading the rummy app. Visit Deccan rummy and download the Deccan Rummy Mobile app for Android and iOS to enjoy a seamless rummy experience on the go!