Doesn’t the title itself does look different? Thinking of how one can relate these two games? There are several terms like skill, smartness, strategy and many more that connect both the games. 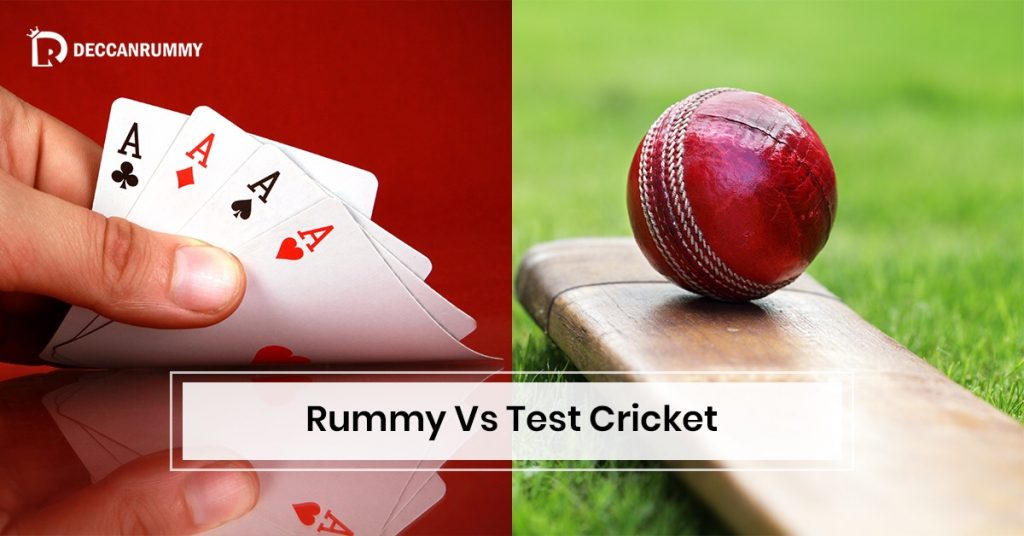 What are we going to compare?

The blog is on a study between test cricket and rummy. A game that has come all the way from the south-east part of England is the most followed game in India. The game had its rapid growth in the second half of the 20th century in the country. Day by day, the reach is getting bigger and bigger. Whereas the other one, rummy doesn’t have a clear on origin, but it has a rich history in the country. The game was much popular as there was a huge number playing the game in real life. Whereas, the trend has changed now, as the popularity curve is rising beyond boundaries with the availability in the online gaming platform.

Online Rummy is considered the best form of playing rummy for 21st-century players. The online version doesn’t miss out any of the elements of the game. There are few more elements added to the game by which the quality of the game is much better than the real-life rummy gaming. There have been a lot of sites hosting rummy games 24*7 across different variants of 13-card Indian rummy including Points, pool & Deals rummy. The games have been hosted in different forms, like regular games, rummy tournaments and rummy Leaderboard.

As mentioned, the game started its reign from England. Cricket is also their national game. It is later between two teams with 11 players each. The game initially had just one format, but as time passed by, different forms were established. The governing body of the game at the global level is the International Cricket Council (ICC). Currently, the game is played in 3 formats, including test, ODI, and T20. There have been several countries playing the game in the international scenario. Cricket has its own stadium and kit requirements. Test cricket is a form where the game lasts for five days. The two teams playing the game will have to play a maximum of 2 innings where there isn’t any constrain in the number of overs per team. The constrain is applicable in other formats.

In test cricket, an individual’s temperament is tested, whereas the same happens in the rummy. In test cricket, one has to withstand a lot of mental pressure to play the game that runs for five days. At rummy tables, one doesn’t know about the opponent’s cards. Hence the excitement and the unpredictability factor tests one’s temperament. In both the game the skill is challenged to the highest level. At the rummy tables, the player has to read on the opponents to break through the barriers. It is almost similar to the one in cricket.

One bad mistake can spoil your game in cricket and rummy. One bad session can spoil the entire effort you had put in for a game in cricket. A bad move could distance yourself from victory in rummy as well.