Nothing is stopping our players from playing at Deccan Rummy. From day 1 of our launch, there has been some fantastic performances at our tables. We came to see one such performance yesterday. It was the Ugadi Special Tournament! It sounded to be a perfect start to a new year. The tournament had a completely new structure this year. The tourney was split into 3 levels, including Ugadi Satellite, Ugadi Qualifier, and Ugadi Special Finale tourney. The tourney has been open to all and, also had an option to play the finale without playing the initial stages. The tournament has placed itself on a perfect calendar timeline. Ugadi is really an auspicious and special time in the Deccan plateau region of India. The tournament starts from March 23 to March 25. 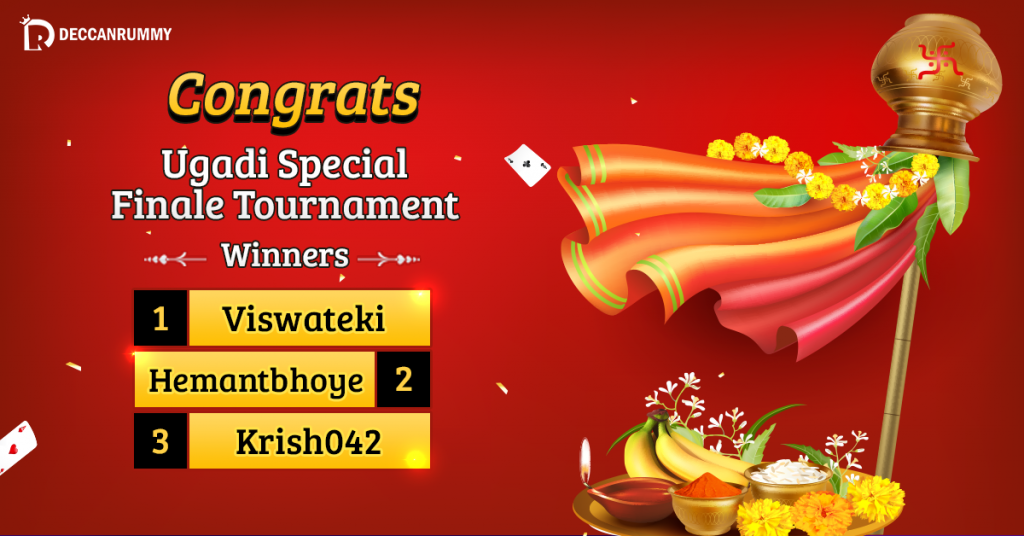 The contest started on March 23 and the first stage of the tourney saw some aspiring rummy players sharing the table with some of the renowned faces of Deccan Rummy. The competition had its own flavors with players fighting hard with the cards to progress in the tourney. The beginning had a reward bag worth ₹20k along with 46 free tickets to the qualifiers stage. Virat 4 stood tall defeating many star players at the very beginning of the tourney with some outstanding moves at the table. We won some handsome part from the prize pool along with a ticket to enter the qualifier stage. The satellite stage saw 46 players moving on to the next level.

Held on March 24, the qualifiers stage saw the next of gaming among our players. Players can join the contest either by using the free entry ticket or by making a buy-in of ₹100. The registration itself was a quick one. 299 seats in total were available at this level. The reward bag had ₹ 30k in total along with 100 tickets to join the special finale round. There were many nail-biting moments at the table. rknaidukoti Won the round getting a good sum of money from the prize pool amount. 100 players were given free tickets to join the finale round.

The biggest advantage of this Ugadi tournament format is that a player who has lost the initial stage or even if the player hasn’t been a part of the tournament here before can join the finale round by making a buy-in of ₹ 200. There were 250 seats for players to battle out in the grand final. The prize pool was ₹ 50k. A great day with a great tournament. On March 25, Deccan Rummy had some fantabulous show of Rummy skills. Ugadi finale had top contenders of which 3 players held on to the top 3 slots. Viswateki, Hemantbhoye, and krish042 were the outstanding performers of the tourney. Viswateki had to mentioned in special, for a fantastic display of rummy gaming. We would like to thank and congratulate every contender.

We have got a lot more for you. There’s more to come in the future. Stay connected with Deccan Rummy!