The craziness continues at DeccanRummy.com with our festival special tournaments. Yesterday being Ugadi an auspicious occasion for south Indians, saw yet another special tournament wrapped up here. Going by our reputation to hold special tournament for all Indian festivals, we made an announcement for Ugadi Special Tournament, a week before so that players have sufficient time for practice. Turns out that practice before a big rummy tournament such as this would be of immense help.

Much to our delight, 300 players turned up for the event making a buy-in of Rs. 50. The action was at its best; extremely competitive and pulsating. Since the 13 card Rummy game was no longer just a hobby and there are many pros around, one can expect our tourneys to be played by everyone from novices to vintage pros. 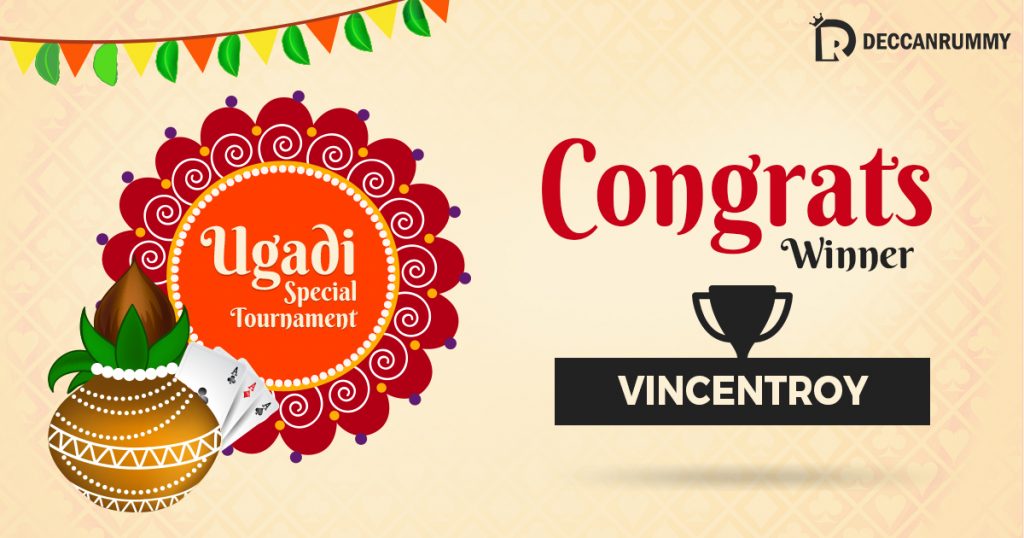 Players were engaged in a ferocious battle of skills with one trying to outplay the other with their skills. After some fine tournament action that saw some big pros being knocked down, VincentRoy was the one who emerged successful. Beating 299 players competing for the prize is no easy task. Only when you have the capability to maintain your dominance all the way, you can hang on till the final. Today it was VincentRoy that turned his beast mode on and outplayed his opponents convincingly. In addition to bagging the winner’s tag, Vincent Roy won a cash prize of Rs. . Kumar8940 and Eshwari despite giving their best effort had to settle for the second and third spots. But that’s ok! Given the incredible competition, it’s bound to happen.

Deccan Rummy heartily congratulates VincentRoy for his exceptional efforts and we hope to see him win more tourneys in future. We would like to extend our special appreciations to Kumar8940 and Eshwari for their awesome efforts.

To sum it up, Deccan Rummy’s Ugadi Special Tourney was a grand success and we hope to do our best to fulfill the desires of the entire rummy fraternity.

Tough luck to all those who couldn’t make the cut this time. Remember winning is not everything in a sport, only the effort matters! Keep trying hard, your glorious days aren’t that far away.

We have many exciting rummy promotions and offers lined up. Stay connected to avail each and everyone of them. Happy Playing!