Advance Ugadi wishes to all our players! Let the special festival bring unlimited happiness in your home. Here’s a festival announcement from our side. Ugadi Special Tournament on the way!- A special tourney in an all-new gaming structure.  Kick start a new year with a special tournament.

Ugadi is also called Yugadi. It is a special date for the Hindus from Maharashtra, Andra Pradesh, Telangana, and Karnataka states of India. The term Ugadi means “beginning of a new age” and is celebrated on the first day of the Hindu calendar month “Chaitra”. It usually falls either in the month of March or April in the English calendar. This year it is on March 25.

Preparations start a week early in the country. The homes are cleaned with fresh mango leaves hung at the entrance. New clothes, colorful grand Kollam increase the richness of the day. Special prayers are done in temples praying for an excellent year ahead. People also prepare special dishes, of which, patchadi – a chutney dish is a highlight amongst the servings. When it comes to the sweet flavors Bobbattu (kind of poli bread) is a popular one. In Karnataka, a special dish called obbattu is prepared.

People also celebrate by helping and giving gifts to the needy. You could see processions along the streets of Maharashtra with music and dance.

Are you looking for something special? This is for you: 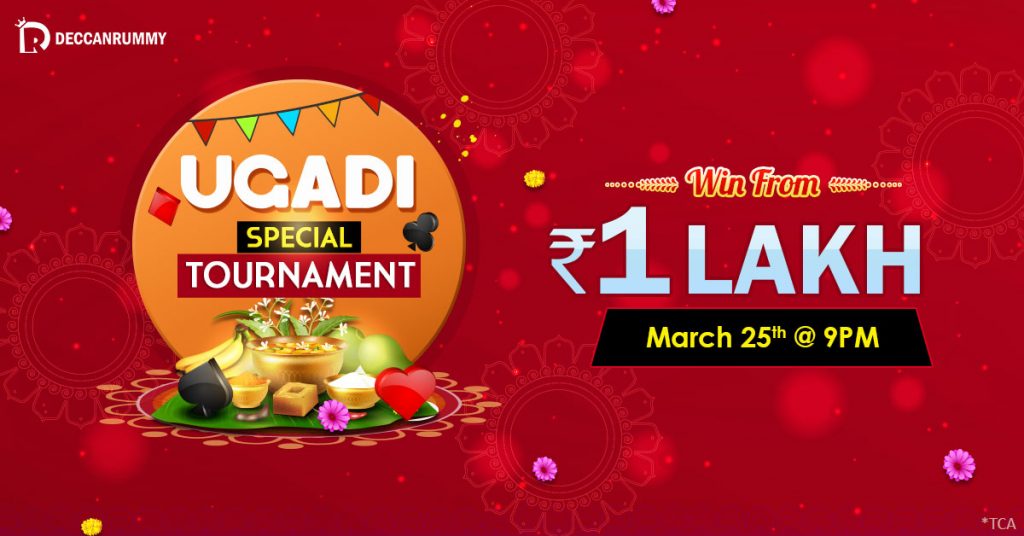 Deccan Rummy is back with another extraordinary festival promotion. This is something for Rummy enthusiasts. The tournament starts from March 23 – 25. The tourney carries prizes worth ₹ 1 lakh. The tournament is split into 3 different stages.

All 3 days the corresponding round will start by 9 pm and registration starts by 3 pm. Every round has its own entry fee and varying rewards. The tournament gets better every day you play it.

Players can either use tickets or make a buy-in to play the different levels.

The overall prize pool of the tourney is ₹ 1 lakh. The prize amount is split into 20k, 30k, and 50k for every round in order of Satellite, Qualifier, and Finale. It sounds really good na, to win a tournament worth ₹1 lakh at the very beginning of the year. It is really a great treat for Rummy enthusiasts to play a tournament like this.

The tourney is open to all. Each and every player has every possibility to win this fantastic special tournament.

We have players like Vincent Roy, who won the 2018 Ugadi tournament.  VincentRoy had some fierce battle at the table before getting crowned the champion.

We are excited so as you are. It’s time to test your Rummy skills.