Two years after the critically acclaimed horror movie IT took the box office by storm with massive earning close to $700 million, the makers have come back with the sequel. According to the early reviews, the reviewers are raving about the film as an instant classic. If you’d missed the first part on theatres, here’s a solid chance to make up for it. 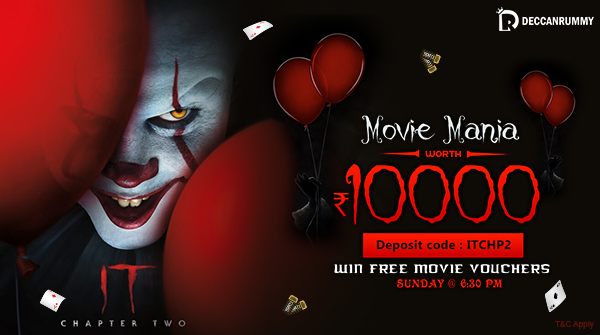 After nearly two years of waiting, Pennywise the Dancing Clown is back to send chills down your spines with It Chapter Two. Now the sequence is more intense and thrilling than ever – and now fans are being given the chance to watch the horror sequel on the theatres of their choice with an easy tournament.

Get to watch this spine-chilling horror movie in the theatre of your choice by playing our Movie Mania – IT Chapter two” tournament this Sunday at 6:30 PM. Free tickets for the rummy tournament can be obtained by making a deposit of Rs. 500 with the deposit code “ITCHP2”. Players also have an option to join movie mania tourney with a buy-in of Rs. 50.

The rules are very simple. All you only need to do is make a deposit of Rs. 500 to your account and voila; you stand a chance to win a voucher. You are just two steps away from winning the voucher.

The monsoon is at its peak, and it’s a shower of fun, thrill, excitement, and prizes at Deccan Rummy. So, don’t let this opportunity go. Hone your rummy skills and get going instantly!