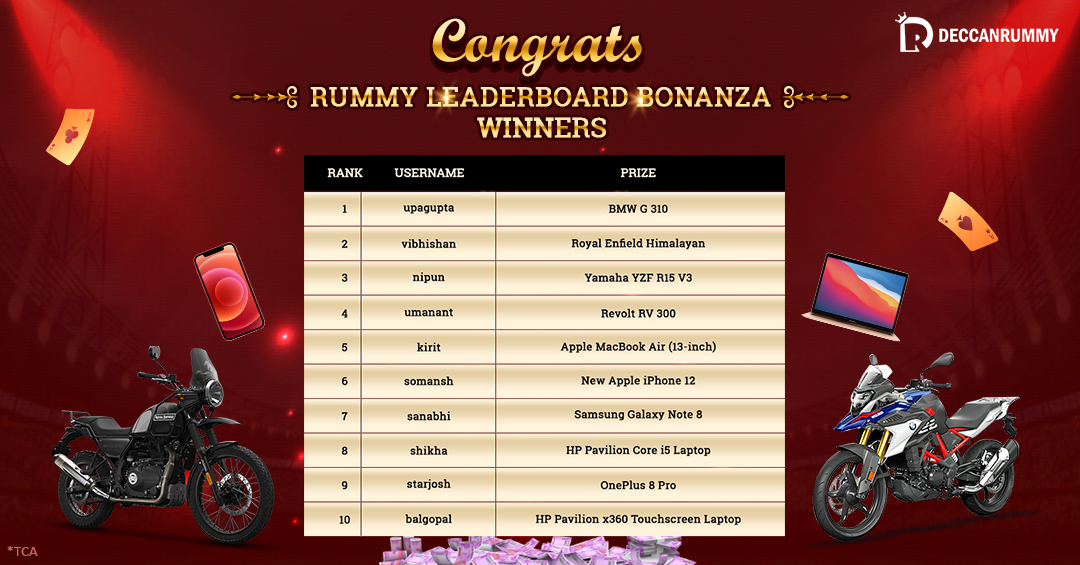 Deccan Rummy’s Cricket season promotions Rummy Leaderboard Bonanza and RFL 2021 successfully concluded last Friday. Headlining the Indian Rummy circuit during this cricket season, both these contests attracted a vast number of players across the country. A tournament and leaderboard of this stature are not very common within the Indian Rummy circuit. So, it’s no wonder that both these contests were instantly popular among the players.

Conducted in two stages, the contests saw the fierce battles for the prizes. Who would want to miss out on exciting giveaways such as BMW Bikes, RE Himalayan and other wonderful prizes? After nearly 50 days of exciting rummy action in both these contests, multiple winners have benefitted in a grand way. While the RFL tourney matched the excitement of the cricket match every day, Rummy Leaderboard Bonanza was an incredible test of patience, skill, and endurance. Many players had the opportunity to double their winnings with RFL 2021.

Being the most prestigious event in recent times, Rummy Leaderboard Bonanza attracted some of the biggest names in the domestic Rummy circuit. The event was spectacular from start to finish with players trying to consistently push themselves ahead in the rankings. It was truly astonishing to see the lengths players go, in order to seal a spot in this tough race. Being a contest where your fortunes could change quickly anytime, players had to get their cricketing predictions right while also bringing their top game to the table.

After 50 days of fierce battle, it was upagupta who stood tall in this contest, thereby securing the first spot. For his stellar efforts, he would receive the first prize of BMW G310 Shortly. Deccan Rummy team congratulates “upagupta” for his spectacular efforts in this contest. it wasn’t all smooth sailing for him as he had to grind through an epic battle against multiple players over a long period. Winning a contest like this is always a remarkable achievement in a rummy player’s career. It’s a milestone to remember for Upagupta.

Special congratulations to Vibishan and Nipun for securing the second and third spots respectively. For their superior efforts, they would be receiving the RE Himalayan and Yamaha YZF. Umanant and Kirit walked away winning Revolt RV 300 and Apple Macbook Air by securing the fourth and fifth positions respectively.

We would like to congratulate all the other winners and other players who participated and made this event a grand success. A massive hit among the rummy-playing masses, the rummy leaderboard bonanza is one of the memorable events in the Indian rummy circuit.

There is a lot to look forward to in the upcoming months with festival season in full swing. Get ready to be a part of exciting tourneys, challenges, leaderboard contests.