Rummy has grown on to become one of the best mind based game in our country. The buzz that rummy game generates of late indicates that the growth and reach of this game are on an upscale. The widespread attention that the game is getting through various sources manifests itself in the form of full house participation in all the tournaments organized by different rummy online websites.

Just like every other tournament we host, DeccanRummy.com received a thumping response from players across India in the recently concluded Navratri Special Tournaments. Amidst the fervor and energy surrounding this colorful festival, it was heartening to see the players grind in this tournament.

The prize pool in this tourney was Rs. 50000. As it was a freeroll tournament, people stormed in to participate. The tournament was conducted over a span of 5 days from Sept 26-30 with the prize money split as Rs. 10000 for each day. Normally festival freeroll events like this see huge participation as the players play with great festival spirit and enthusiasm. This tournament was no exception – more than 1500 players participated in this tourney, which itself is a huge number! We at DeccanRummy.com are absolutely delighted to see this massive turnout and would like to thank all our players for their passion. We could notice that passion and interest for the game inspired the players more than the prize money. It is participation like this that gives us the hope that all our future tournaments and promotions are destined to be a success.

The atmosphere was very vibrant with fiery players going at each other, to seal the top spot. Any tournament that promises Rs. 10000 without any investment is a boon for the players. Every day a certain number of players received cash bonus prizes with the winner taking a major chunk.  At the conclusion of this series of Navratri tournaments, 5 players emerged as the top player for each day. 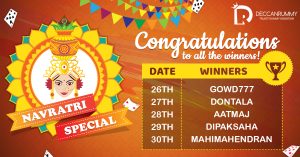 These are the five players who won the first prize each day in our Navratri Special Tournaments. DeccanRummy congratulates these 5 players for their incredible success and we wish them all the best for our future tournaments. We would like to extend our commiserations to those who couldn’t win this time and would like to extend our deepest thanks for participating. Without the passionate participation from our players, this event wouldn’t have been a success.

A spectacular turnout like this motivates us to push harder to give more to our players. You can count on us to hold a tournament that is much bigger and grander than this in the near future. As to the immediate future, you have Diwali Dhoom tourney and Monsoon Thunders to look forward. Both these tournaments carry an enviable prizepool and require you to follow very simple steps to participate. We hope players will storm in huge numbers to make them a grant success. Thanks again for participating & see you soon at our tables in a much bigger tourney!