The grandest event of cricket just went underway a few days back in the home of the game. England is where it began, and it’s fitting that the grandest cricketing event of the cricket is conducted there. 10 teams across the globe would be gunning for the biggest trophy in a round-robin format where every team plays the other teams once. Cricket fans throughout the globe would witness some explosive batting, assiduous bowling and breathtaking fielding efforts as each team would put their heart and soul into the match. We are going to witness joy, pain, anguish, and heartbreaks as the tournament progresses. The team which manages to hold their nerves together would successfully defend the cup.

Team India and the billion hopes

We are a nation that breathes and lives cricket. Cricket is by far the number one watched sport in India with the cricketers enjoying a popularity that film stars could envy. The raw passion, enthusiasm, and emotion, Indians have towards the team is something spectacular to notice. As usual, a billion hopes are pinned on the boys in blue to deliver in the grandest stage of them all. Whether Virat Kohli and Co are able to fulfill the huge expectation on them is something that we will get to know after 45 days from now.

Matching the excitement of the world cup, there is a flurry of offers across the internet for the fans to enjoy. As a user the choices available in front of you are overwhelming. With so many fantasy leagues around, the players now are having a gala time participating in such contests. However, the outcome of such contests relies largely on the performance of the players you’ve selected. At Deccan Rummy, we’ve created a contest where you become the action rather than just being a spectator. 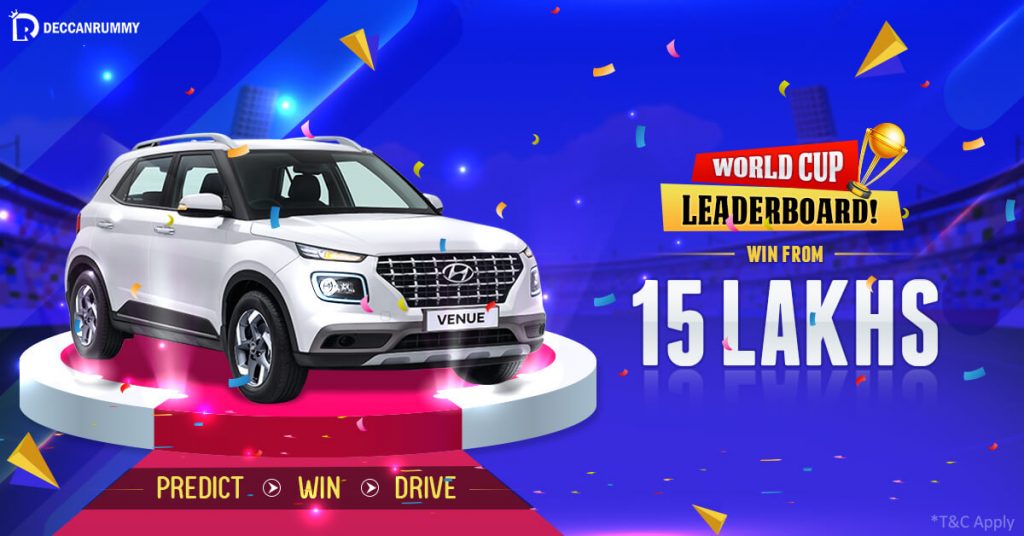 Yes! In addition to our Howzat tournament happening every day, we are adding yet another spectacular world cup promotion for our users.  Deccan Rummy is proud to announce the launch of World Cup Leaderboard race. Coming with an earth-shattering prize pool of 15 Lakhs, the contest runs till July 14. We at Deccan Rummy are not contented to rest on our past laurels, so we are always looking out for ways to better ourselves in terms of our offerings. Hosting rousing offers and tempting promotions are our way of doing things.

World Cup Leaderboard – how to feature?

As the name suggests, it’s a leaderboard contest where players are ranked according to the world cup points he/she generates during every match. We know how points mean prizes. How to gather those points? Here’s a step by step procedure of how to place yourself in the world cup leaderboard

So, we guess this contest is enticing enough for you to stay glued to the rummy game for a month. Sit back relaxedly, grab a cup of coffee, get perched in the corner, put your cricket and rummy skills into the table and watch your name fly up in the leaderboard. With exciting rummy action complimenting the riveting cricket action, the stakes are running high, there couldn’t have been a better time to be a rummy player. Your journey to the top of the leaderboard is just a few steps away! Go get’ em!