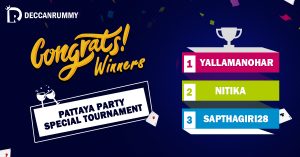 It was a day to remember here at DeccanRummy.com. Much-talked about Pattaya Party Special tournament was conducted today here at DeccanRummy.com. It would be an understatement to say that the event was a success. The total number of registration was locked in less than half an hour into play. As it is a free ticket based tournament, players were coming in huge to get the free ticket. The interest players displayed in this tournament was very heartening to see.

Right from the time we announced this tournament, players have been passionately getting the free tickets. So huge were the numbers that we couldn’t credit free tickets to players who came at the last minute. That’s the reason we advise players constantly to follow the procedures at the earliest. It just sucks to miss out on a whopping opportunity like this to win real cash.

Since the tourney is in turbo format, it was HOT the moment the action began. Being a freeroll tournament it attracted some of the best freeroll tournament players of the country known for their tight gaming. With the year-end approaching, there could be a no bigger way to sign-off the year than with a win. After the action began, the pendulum swung back and forth in favor of several players and finally an exceptional winner emerged.

Outlasting everyone to come up on top was yallamanohar, who was truly exceptional with his game-play. “When luck joins the game, cleverness scores double” true to the quote, it was Yallamanohar’s day. He was quite simply unstoppable today. We would like to extend our heartiest congratulations to him on this special day and wish to see him do well in all our future tournaments. In a tournament like this with a huge prize pool, it is very important to keep the momentum going from start to finish. Yallamanohar was truly a champion in every sense!

The Deccan Rummy team also wishes the other players who participated in this spectacular tournament. We understand not everyone can win a tournament, but hard work never ever fails. Keep pushing yourself and the glory is not far away.

DeccanRummy.com’s special tournaments have been huge right from our inception and have consistently attracted some of the best rummy minds in the country. Needless to say, a number of talented players are in thick of the action in all our tournaments, so you will always find our tournaments to be challenging. Our Special tournaments have truly come a long way not only in its success as a series but also acting as the face of our company. Keep digging our site for many other exciting rummy offers and promotions shortly. Players can refer rummy rules and how to play rummy tutorial in our site for a better understanding about the game.