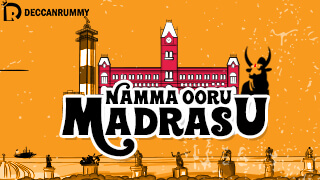 Hey rummy folks, Rummy Raani here. The coffee is super hot and is waiting to be relished by me - Sip-by-Sip. Picked up the clue? Have you guessed the place already? Kudos to all the rummy players out there, who picked up my little clue and found the city. Yes, it's time I reveal my destination - Dear Rummy folks, I'm here at CHENNAI, colloquially referred to as "Madras" and that's exactly the name of this promotion - "Namma Ooru Madras".

As promised, I have something special for you, just like what I had given to all the rummy players in and around Guntur during my #Going2Guntur promotion. Duration of this promotion would be from August 27 to September 1.

The wait is now over. It's time for some enthralling rummy action with an exclusive line of promotions for my dear Deccan players.

We know you guys are really curious to know what the promotions are, here they are

What would a Chennaite die for? Ask him/her what they love the most, the first answer you would get is - "A refreshing homemade filter kaapi every morning". It is unmissable part of the daily routine of every Chennaite, to down XYZ number of cups of Filter Coffee/day. We are going to replicate that exact freshness here with a simple promotion. Mind you, the promotion may be too simple but the aroma & the taste that a filter coffee offers is simply mesmerizing and that’s how exciting this promotion is going to be.

Steps to Win a stunning Cash bonus of Rs.50

a. Count the number of coffee mugs that are given in the page "Play Rummy" (coffee mugs are inserted between the texts).

Players who successfully complete the above steps would win the Instant Cash bonus of Rs.50.

Marina Match (Five Card sequence) has found a massive acceptance amongst our players and has been a huge success. Lot of players availed the offers and benefited richly from the offers. With the same interest and vigor, do participate in the For Central promotion where you have to build a monumental 4 card sequence of Number 4 card and win 10% extra cash bonus on your winnings.

Chennai Central station is a monumental landmark of Madras, which commonly is used to represent Chennai in every media publications and in movies. It connects the south to the other three corners of India. To mark this quadrilateral connection, win the game with a monumental 4 set of number 4 card and win huge bonus cash - 10% of Table winnings as cash bonus.

Offer valid until the promotion ends. Try, try and you'll win 10% plus everytime.

Take advantages of these awesome rummy promotions so that you will get to know why Deccan Rummy remains as the ultimate rummy site to play card games online.

Celebrate the Gateway of South India

Chennai and its Uniqueness

Chennai, earlier called as Madras is one of the oldest city in the world. The Madras City Corporation is the second oldest city corporation formed after London city in the world. Chennai city is very special and unique in many ways. In a westernizing India, Chennai is very traditional and culturally very strong city. Contrary to the strong belief that Chennai is not friendly to outsiders, it allows even an outsider to become a celebrity, a business owner, a leader, CM etc. Of all the cities in India, Chennai leads in the number of voluntary organ donations due to increased public awareness.

Chennai and its Landmarks