Indian Rummy is one of the most popularly played game in India since time immemorial. Just like other card games, playing rummy card games was largely restricted indoors until the emergence of the internet. After the arrival of internet aided gaming platforms, traditional games like Indian Rummy and Teen Patti are now available online. The game has taken over the virtual realm completely. It's simple, fun, and quite easy to play.

Rummy is one of the oldest card games which traces its origin to the Mexican card game Conquian. Rummy is a group of matching card games where the idea is to match cards belonging to the same rank or sequence. The basic idea in any rummy game is to create melds. In simple terms, it is a combination. Melds consist of sets and sequences. While three or four cards belonging to the same rank form a set, three or more cards in a sequence belonging to the same suit form a sequence. Rummy game is played with a minimum of 2 players and a maximum of 6 players. Two standard decks (52 cards) along with two jokers are used in a game.

What is Indian Rummy?

Indian Rummy or Paplu or 13 card rummy is the most common form of Rummy that is played all over India. Indian rummy game is considered to be a combination of 500 rummy and gin rummy.2-6 players can play the game. Thirteen cards are uniformly distributed to all the players in the table, and they have to meld the cards into proper sets and sequences. The game is quite popular in kitty circles, marriage functions, and even in local trains. It's a game of skill where players need to deploy a variety of mental abilities to prevail in the game. The game demands the player to use their memory skills, logical skills, and observation powers.

Why is Rummy called a skill-based game in India?

13 card rummy is all about matching the cards of the same sequences or sets. Contrary to the popular myth that luck decides the fate of the rummy game, it is the skills that act as the deciding factor in the game. Rummy entails some amount of expertise as the game warrants some skills like a good memory, concentration, and sound decision making. Players with excellent logical and analytical abilities find it easier to win big games.

Players go through a rigorous journey on their way to become a pro. In simple words, we can call Indian Rummy as a mind game which helps us to sharpen our skills.

Is Rummy Legal in India?

Playing Rummy with or without cash is legal. Supreme Court, in a landmark judgment, observed, "The game of rummy is not a game entirely of chance like the 'three-card' game. The 'three-card' game, which goes under different names such as 'flush,' 'brag,' etc. is a game of pure chance. Rummy, on the other hand, requires a certain amount of skill because the fall of the card has to be memorized, and building up a Rummy requires considerable skill in holding and discarding cards".

How many Versions of the Rummy game are there?

The rummy game though an exciting game as it is, its online version, adds to the excitement by providing multiple variants for the players to enjoy. Here we provide you with various variants and their rules.

It is the simplest form of Rummy that is widely popular among rummy enthusiasts. Typically, a game lasts just for a few minutes. It is the variant that is most loved by rummy lovers as it captures the full essence of Rummy in a limited time. Monetary value is preset right at the start of the game. The rules of the game remain the same as general Rummy. The player who finishes first wins the amount as (sum of points of all opponents) x (monetary value of 1 point).

Deals rummy is the second most popular rummy variant. The game is played for a fixed number of deals. Each player gets an equal amount of chips at the start of the game. At the end of each deal, the losers have to surrender their chips to the winners, and the winners go into the next round with those chips. When all the deals are over, the players are ranked according to their chip count. The player with the highest number of chips wins the game. Player winnings are calculated as follows; Amount won = (Entry fee * No of players) - Rake Fee of DeccanRummy

Pool Rummy is a vast and expansive rummy variant very often preferred by pros. As the name suggests, players in the table pool in money to play the game. The variant has two versions – 101Pool Rummy and 201 Pool Rummy. Unlike Deals rummy, the game does not have time or deal limit; the game goes on till all, but one player remains eliminated.

In this variant, players have to rival their opponents to cross 101 points. As soon as they pass them, they will get booted out of the table. The game goes till a player emerges as a winner.

Here in this variant, the players who cross 201 points will get eliminated. In the end, only one winning player remains in the table. The winning fee is the player is calculated as follows; Winning fees = (Total no of Players * Joining fee – DeccanRummy Fee)Though there are different variations of classic Rummy apart from the one given below, the rummy rules and gameplay remains the same. As the game spread across different parts of the world, patrons of the game introduced changes to create their customized versions of the game.

What are the rules for playing rummy?

Here are the basic rules of the 13 card rummy game.

In 13 card rummy game, each player is dealt with 13 cards and his/her objective must be to meld these 13cards into proper sequences and/or sets. In order for a successful declare, the player needs to have atleast two sequences out of which one must be a pure sequence. Without a pure sequence, your meld becomes invalid declaration. For a successful declare, you need atleast two combinations.

The game basically is a draw and discard game where the player needs to pick a card and drop one. The cards that the player drops become the discard pile or open deck from where other players can also pick their cards. The deck with its face closed is the closed deck.

How to Form sequences?

Sequences are a group of Three or more consecutive cards on a same suit. In a 13 card rummy game, there are two kinds of sequences: a pure sequence and an impure sequence.

What is a pure sequence in Rummy?

What is an impure sequence in Rummy?

What is a set in rummy?

How to Play Rummy Online?

Indian Rummy is a game of skill so one needs to consistently update himself in order to meet the challenges. It can only be achieved with practice. Whether you are a newbie or a pro, practice is mandatory. For the newbie, it will give him experience, for the veterans, it will help them stay on top of their game.

Having said that, there are a few rummy tricks and strategies which come to your aid while playing the game.

How to play cash rummy games?

Cash Rummy games are where the real money lies in. It is the place to prove your expertise as a player as it has a vast array of players at all skill levels. It is every players’ dream to be successful in online rummy. The element of cash in the game makes the game more alluring, fun and entertaining.

However, moving to cash games and carving a niche over there requires considerable amount of practice. Not every player can transition to cash games without hassle. It involves good bankroll management, controlling your emotions in the table, and harnessing your skills. Once you are confident enough to meet the demanding nature of cash games, you can move into that zone. 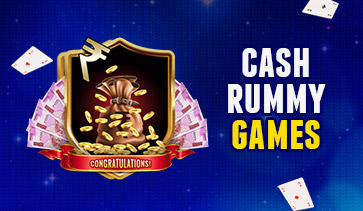 How to get started with real money rummy games? 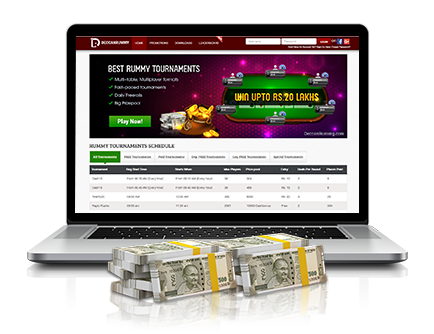 How to play cash rummy games?

Ask any player, what intrigues him more as a rummy player? His answer would most certainly be rummy tournaments. The battle of putting your skills on the line in a competitive environment is too hard to resist for any serious gamer. In the bygone eras, rummy tournaments were conducted periodically during house parties, festival celebrations and in clubs.

The invention of online rummy made tournaments even more accessible for the common player. Now you can enjoy winning massive amount of cash winning a tournament from the comfort of your homes.

The big tournaments now exist online with regular tournaments that draw players from all corners of the country. Tournaments are extremely competitive and truly require the players to perform at his fullest potential. Everyday thousands of players hit our tables in hope of adding to their bankroll. For some of them, it has really been a life-changing experience.

Deccan Rummy has a range of tournaments to choose from. All the player requires is to identify the tournament that is suited to him and then start playing.

If you are beginner then freerolls are one of the best way to gain tournament experience. If you don’t want to invest real money, then again freerolls are the one for you.

Deccan Rummy has a range of freeroll tournaments running throughout the month with a collective worth of over Rs. 20 Lakhs. Join our mind-blowing tournaments

As the name indicates, Cash Rummy tournaments are those tournaments where you have to play a small entry fee in order to participate. We have one of the best line up of cash rummy tournaments worth 15 Lakhs. Enjoy the most exciting formats in its truest form here.

Rummy is a game which finds its presence during all major Indian festivals and other family gatherings. It is widely believed playing card games during festivals is supposed to bring in luck and fortunes. Keeping that belief in tact, Deccan Rummy hosts special rummy tournaments and leaderboard contests during all major Indian festivals like Diwali, Durga Pooja, and Makara Sankranti. Our festival special contests attracts the best rummy minds across all walks of life. Special Rummy contests at Deccan rummy add a dash of extra excitement to the festival and gives players the feeling of completeness. Nothing comes close to the joy and excitement of winning on an auspicious occasions. Stay connected with Deccan Rummy for exciting festive special contests.

Leaderboard is a supreme form of dominance and winning in Online Rummy. It is an exclusive format of ranking players based on their performance within the mentioned time period. At Deccan Rummy, you get placed in the leaderboard, based on your playing record on cash tables. Things turn really big in a leaderboard. The competition, the quality of gaming, the prize pool all together make a leaderboard look giant for Rummy players.

At Deccan Rummy, players are given a chance to win big every week. The timeline every week starts from Sunday at 00:00 AM to Saturday 23:59 PM. Players are ranked based on the loyalty point generated within the time mentioned before. Finishing on top can get you trending smartphones and cash bonuses. You can never find something like this anywhere in Indian Online Rummy Community.

Play 13 cards Classic Rummy online 24x7 games with us & join the fun. Stay Connected with us for a incredible Indian rummy experience